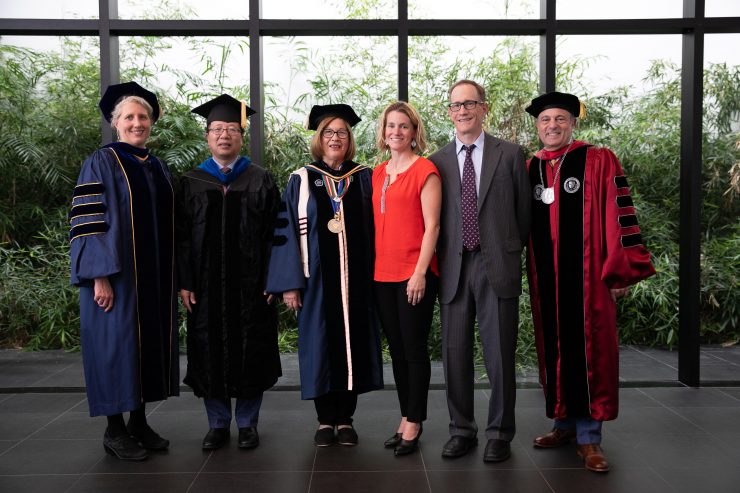 “I have a great picture of Robin Herrnstein helping me haul cement in a wheelbarrow,” said Professor Patricia Wright before the October 18 ceremony that invested her as the Herrnstein Family Endowed Chair in Conservation Biology. “That’s the kind of hands-on people the Herrnsteins are. Their souls are invested in Madagascar.”

Endowing a chair is one of many commitments that Jim and Robin Herrnstein have made to Stony Brook and to Stony Brook’s Centre ValBio (CVB) on the outskirts of Madagascar’s Ranomafana National Park.

The Herrnsteins, lauded by the Wall Street Journal for their philanthropy, led the effort to establish CVB’s Board of Advisors — with Jim as its founding chair – and spearheaded the $3.5 million fundraising effort to build CVB’s NanamaBe Hall, the country’s leading research center. They continue to support health care and scientific research in Madagascar through their own non-governmental organization, PIVOT, working in partnership with Wright and her Stony Brook team.

“The generosity of Robin and Jim Herrnstein is a prime example of the power of philanthropy,” said Stony Brook University Interim President Michael A. Bernstein. “The impact of their giving can be felt across our campus, from scientific research, to the arts to athletics. However, in all of their giving to Stony Brook, Robin and Jim’s extraordinary commitment to Centre Val Bio and to global health and conservation work in Madagascar stands out.”

Still, for Wright, the hands-on commitment of the Herrnsteins speaks in a way that goes far beyond dollars. Having invested decades of her own career in Madagascar — where she discovered the golden bamboo lemur in 1986, then led the effort to create Ranomafana National Park as a means of protecting the lemurs’ rainforest home from loggers and deforestation, Wright is truly appreciative of what the Herrnsteins have done and continue to do.

“I feel very proud that after they looked at other projects, they decided on us.” Wright said. “I think the Herrnsteins liked that from the beginning, we involved people in the protection of wildlife. Wildlife and people together; it’s the only way to save Madagascar’s Rainforest”

For their part, the Herrnsteins speak of their support of Wright and CVB with the conviction of a family that has come to truly believe in the significance of Wright’s work.

“Over the course of the last decade, we’ve come to appreciate just how original, unusual, and urgent Pat’s work is,” Jim Herrnstein said at the October 18 investiture ceremony in the Charles B. Wang Center on the Stony Brook University Campus. “We hope this chair will serve as recognition and well-deserved appreciation for all that she’s done for Madagascar, and also for the scientific community. We hope that it helps to secure not only her legacy, but the legacy of Centre ValBio going forward.”

That shared legacy is an impressive one. Over the course of her career, Professor Wright has amassed countless honors, becoming the first woman to win the Indianapolis Prize for Animal Conservation, collecting three medals of honor from the Madagascar government, and being elected to both the American Philosophical Society and the American Association for the Advancement of Science. The park she worked so hard to create has become a UNESCO World Heritage Site, offering even greater levels of protection for the vast biodiversity found in its cloud forest.

And, as CVB continues to serve as the home base for comprehensive efforts to improve the lives of people and Lemurs and other distinct species in Madagascar, the results bolster Stony Brook’s international reputation as a powerful agent of change.

Nicole Sampson, interim dean of the College of Arts and Sciences noted that, “With accomplishments that demonstrate the convergence of science and social good, reflecting the full breadth of the study of anthropology, Pat has carried the Stony Brook name ‘Far Beyond’ the borders of our country and exemplified the power of this University to make an impact in the world.”

Thanks to the Herrnsteins, that power has been amplified in service to a cause that they have found to be essential, not only for the Malagasy people and the species that make their home in Madagascar, but for the planet we depend on.

“It’s really important, urgent work at the intersection of lots of timely issues,” Jim Herrnstein said of CVB’s ongoing activity, “including human health, infectious disease and conservation biology. That path is a path that Pat’s been on for her whole career, and hopefully this chair will allow future generations of academics to pursue similar things.” 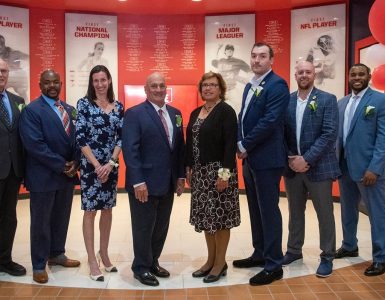 The ceremony honored the induction classes of 2020 and 2021 as the inductees were celebrated for their outstanding contributions to Stony Brook athletics.