Stony Brook Women’s LAX Ready for the Next Level 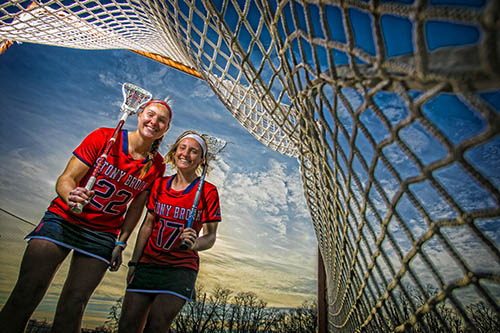 Many signs are pointing to success this year for the Seawolves women’s lacrosse team — success, that is, in the form of a trip to the Final Four in pursuit of a national championship.

Coming off their fourth consecutive America East title, the Seawolves enter this season having won 84 percent of their games over the last four years, the third-best mark in the nation. The team’s stellar standing has been forged during the Coach Joe Spallina era.

In school history — at least on paper — there has never been a better chance for Stony Brook to win it all.

The answers won’t come until Stony Brook powers through March, which is when the Seawolves face off against many nationally ranked opponents, and April, which pits them against conference foes.

But with six pre-season All-Americans, a strong senior class and a fast start, expectations are running high in Seawolves country.

“Our ultimate goal though is to win a national championship,” says Spallina. “That was my goal when I took the job. Every year we have gotten a little closer. Some years are more realistic than others. This year our goals and expectations may just coalesce.”

Stony Brook appears poised to deliver, returning 10 starters, featuring 93 percent of its offensive firepower returning from a season that saw three players score 44 or more goals, and fielding a defense that is among the toughest in the country.

First Team All-American Courtney set the NCAA single-season record last year with 100 goals. She needed only 44 goals to break the NCAA-career-scoring record before her season ended with a torn ACL against Northwestern on March 5. Courtney underwent surgery on March 14 and will receive a medical redshirt to return as a graduate student for the 2018 season.

That leaves two lethal scorers, however, to finish the job the trio started.

Kylie, a Team USA member First Team All-American, tallied 44 goals and 47 assists, and is the nation’s active career leader in points per game. She was also ranked among the top five nationally in points and assists last year.

Dorrien, no less incredible, flew somewhat under the radar despite contributing 53 goals and is ranked sixth among active players nationally in career goals.

With Courtney out of the equation, Dorrien and Kylie will be called upon to shoulder more of the offensive and leadership burdens. “Dorrien maybe doesn’t get the accolades that Kylie and Courtney receive but she is one of our MVPs and an incredible ambassador for our athletics program,” Spallina says.

Dorrien is finally getting the national respect she deserves, however. While Kylie is a frontrunner for The Tewaaraton Award, given annually to the most outstanding American college lacrosse player, Dorrien was named to the Tewaaraton watch list in late February.

This might be the opening for someone such as Taryn Ohlmiller, Kylie’s freshman sister, who was named America East Rookie of the Week twice in early March, to see more touches and help keep the offense flowing.

All-American midfielder Kristin Yevoli is certain to contribute to the offense and make an impact on the season’s outcome as well.

Opponents would be wise to not overlook the Seawolves defense, however. Tamping down opponents’ chances to keep pace with the potent Seawolves offense will be senior All-American Honorable Mention defender Jessica Volpe and junior Carolyn Carrera, a transfer from Hofstra University.

Junior Brooke Gubitosi rounds out the defensive corps. She was named America East Defensive Player of the Week in March 2016 after she racked up a career-high four caused turnovers against a top-10 Florida squad.

Spallina constantly reminds his players that “defense remains the staple of the team.”

This program is no flash in the pan, however.

One of the big reasons for that is goalie Anna Tesoriero, who is only a sophomore and already playing at such a high level. Named an America East First-Team All-Conference and All-Rookie selection, her goals against average was the best by a Division I freshman since 2002.

Team chemistry is another reason why the Seawolves are poised to make noise this year. “We’ve been playing together for so long that I feel as if I could play with my eyes closed and know where some of my teammates are,” Dorrien says.

“We know one another’s strengths and try to set each other up for the best opportunities to use those strengths,” says Kylie.

Coach Spallina is proud of the team for its accomplishments outside of the lines as well, pointing to a 3.3 average GPA and community service that includes walks for breast cancer awareness and monthly visits to cheer up pediatric cancer patients.

“There is not a kid who works harder than she does every day, whether it is lifting or running. She will be our captain next year. She’s a great young lady who is going to impact the world,” says Spallina.

Dorrien has also been on the dean’s list every semester and has won two undergraduate awards, while Kylie has received two Undergraduate Recognition Awards to go with her two All-American nominations.

Spallina has done his homework as well, setting up the schedule so that Stony Brook is playing nationally ranked out-of-conference opponents before the Seawolves go up against conference teams.

As Courtney says, “It’s easy to be a good player against lower-ranked teams but to produce in big games defines a true leader. We need to get off on a good foot against the ranked opponents.”

“You want to be able to fix things in February and March rather than wait for April and May,” Spallina says.

Coach Spallina has more than done his part as the program’s architect, luring blue-chip student-athletes here who are fierce competitors. “I didn’t know much about the school but he promised a lot of stardom and a winning culture and he has accomplished everything he said he would,” says Courtney, who once scoffed at the idea that Stony Brook women’s lacrosse could reverse its fortunes. The Seawolves’ meteoric rise makes it seem like ages ago that they endured a stretch of sub-.500 seasons.

One thing that is indisputable: As the publicity poster claims, this is Long Island’s team. Twenty-seven of the Seawolves’ 30 roster players are homegrown.

Courtney, from Shirley, New York, followed in her brother’s footsteps, picking up a stick at an early age and competing against boys during primary school. Kylie, who hails from Islip, New York, epitomizes the scrappy self-confidence and tireless work ethic that Coach Spallina encourages in his players. Realizing she wasn’t stellar at soccer, she took to lacrosse like a Long Island surfer to the ocean and never regretted the decision.

Never content with the status quo, this lunch-bucket athlete made fitness her priority in the offseason by lifting, shooting or playing wallball while she made the gym her second home.

She is also the one who made good on her high school yearbook promise to make the ESPN highlight reel, which she has done with behind-the-back goals on several occasions. Her teammates have come to expect her splashy style and remain unfazed when it happens.

Applying her Batman eye black and popping a handful of Skittles in her mouth, her pre-game ritual of choice, Kylie says, “We have to win some big games coming up.” But then she flashes her signature smile. “I’m just enjoying the ride.”