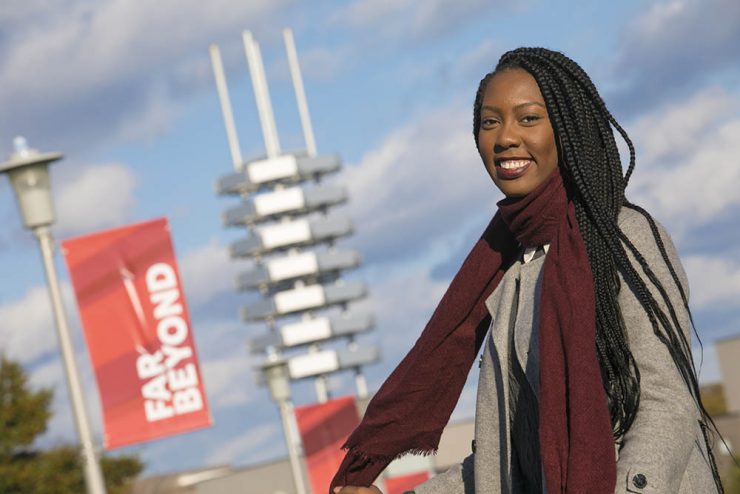 Pamela Best remembers feeling “intimidated” by the prospect of doing research when she began freshman classes at Stony Brook University in fall 2015.

Yet within months, she was working at a nearby hospital, studying patients’ case histories, taking EEG readings, and processing blood and urine samples, as part of a summer 2016 internship with a clinical research project tracking the early stages of psychosis. As a sophomore, she helped a county mental-health research team conduct interviews for a longitudinal study of 725 people who had experienced their first psychotic episode 25 years earlier.

Soon after, she began investigating treatments for incontinence caused by spinal-cord injuries, using rats and meeting on a daily basis with Stony Brook professors in neurobiology, physiology, and biophysics to discuss findings and methodologies. The Stony Brook senior has begun work on a clinical trial using transcranial direct-current stimulation to treat fatigue associated with multiple sclerosis. After she graduates in May 2019, with a double major in biochemistry and psychology, she plans to pursue a medical or doctoral degree, specializing in neurology.

It is a “huge shift,” she says, from the career field she had originally envisioned. As a high school student, Best had planned to attend art college. She opted instead for Stony Brook, located on Long Island near where she grew up, for a quality education where she would have less student loans. Once on the campus, she gravitated toward the STEM fields.

“I probably wouldn’t have even considered health as a future career if I had not come here to Stony Brook,” Best says. “But I feel more fulfilled doing this than anything I had ever thought about doing before.”

Best’s growth as a researcher is just one example of how Stony Brook, one of New York’s top public universities and a flagship of the State University of New York, is exceeding expectations. Stony Brook is committed to providing hands-on, research-focused learning experiences for its undergraduates as early as their freshman year, and it stands among 10 universities nationwide that are recognized by the National Science Foundation for combining undergraduate education and research.

“It is critical that undergraduates get engaged and see the relevance of their education,” says Robert Kukta, associate dean of education innovation in Stony Brook’s College of Engineering and Applied Sciences. “It helps them shape their paths.”

As a result, growing numbers of Stony Brook undergraduates are building stronger career paths, presenting findings at conferences, publishing in scientific journals, and winning prestigious scholarships and awards. For example, in 2018 Lydia Senatus became the first Stony Brook student ever to receive the Charles B. Rangel International Affairs Fellowship, which supports extraordinary individuals pursuing a career in the U.S. Foreign Service.

Senatus graduated last year with a major in economics and a minor in international studies and business management. The fellowship provides Senatus with $95,000 over two years to pursue a master’s degree in international affairs, two summer internships—one in 2018 with a member of Congress and one this year at a U.S. Embassy overseas. After she receives her master’s degree, she can become a U.S. diplomat. Through her years at Stony Brook, Senatus worked closely with Stony Brook professors of Africana studies, political science, and English, and she was chosen for two U.S. State Department internships—one in China and another with the United Nations.

The focus on undergraduate hands-on learning and research is especially important at Stony Brook, a prestigious AAU school, that prides itself on access to excellence for economically disadvantaged students by maintaining competitive in-state tuition, merit-based scholarship opportunities and a highly successful Educational Opportunity Program/Advancement on Individual Merit(EOP/AIM) program. About 40 percent of Stony Brook’s 17,000 undergraduates receive Pell Grants, and roughly one-third are the first in their families to attend college. Many, who attended lower quality high schools or were limited by family income, did not have access to much in the way of academic opportunities and support before coming to Stony Brook.

Such is the case with Wilson Nieves, who graduated last May with a double major in biochemistry and physics and a minor in philosophy. Nieves came to the United States from Ecuador at age 16 and didn’t speak English until after high school. He remembers being amazed as a kid when reading about space, electromagnetism, and anatomy in a science book, but no one was around to help nurture that interest.

Nieves started doing research involving spectrophotometric assays at Stony Brook in summer 2016, under the mentorship of Jarrod B. French, an assistant professor of biochemistry and cell biology. In addition to conversing on research topics, the two often talk about life in general. As Nieves describes it, French “randomly drops advice” that “gets recorded in my head.” Nieves says his research experiences, including his work in summer 2017 in the Amgen Scholars program at Washington University in St. Louis, strengthened his resolve for graduate school.

It is “somewhat incredible,” Nieves says, “to think that I could get a Ph.D. in science and pursue a career in what I love doing.” These research experiences do not happen by chance. Perhaps the most significant push comes through the Undergraduate Research and Creative Activities (URECA) program.

Created in 1987, it was among the first of its kind in the nation. URECA, through University and private funding, awards students a $4,000 stipend to carry out full-time, faculty-mentored projects for 10 weeks during the summer. In 2018, 119 students applied, and 40 received awards.

“Through hands-on learning, our university nurtures students to face the tough questions head on and to use their insights to find powerful solutions,” says Stony Brook University President Samuel L. Stanley Jr. “That’s a big part of our promise.”

In this academic year, Stony Brook’s URECA program also awarded 50 mini-grants, ranging from $55 to $400 each, for undergraduate researchers and scholars to attend professional conferences in such areas as bioengineering, modern languages, and experimental biology. Every year, URECA sponsors a daylong campus symposium for undergraduates to showcase their work. About 350 participated this year.

Every month, URECA selects a “Researcher of the Month,” whose personal story, academic endeavors, and long-term plans are featured in campus publications. At the same time, the URECA office coordinates with a wide variety of disciplines and campus initiatives, including the career center, Honors College, University Scholars, and targeted STEM programs to match students with opportunities. Through the biology department, for example, undergraduates could do research in areas ranging from osteoporosis detection to plant ecology to synaptic plasticity. The department offers a three-session workshop every semester to introduce students to available options and to help them learn how to apply.

“We try to make the pathway as transparent and coherent as possible,” says J. Peter Gergen, a professor of biochemistry and cell biology.

In 2015, the University also centralized its efforts to identify undergraduate researchers who might be competitive for distinguished fellowships, scholarships and awards. Jennifer Green, Stony Brook’s external fellowship adviser, routinely puts out email blasts, holds informational meetings, attends student events, and reaches out to professors to connect with prospects. She works one-on-one with applicants on proposal writing, network building and interview preparation. The number of Stony Brook students applying to the Fulbright Scholar Program, a national merit-based competition for international-study grants, has doubled to about 30 over the past three years.

“At some universities, you have the same five to ten percent who are applying for and getting everything,” Green says. “I try to find the ‘diamonds in the rough,’ those students who don’t even realize their own potential, and that’s where the rest of us come in.”