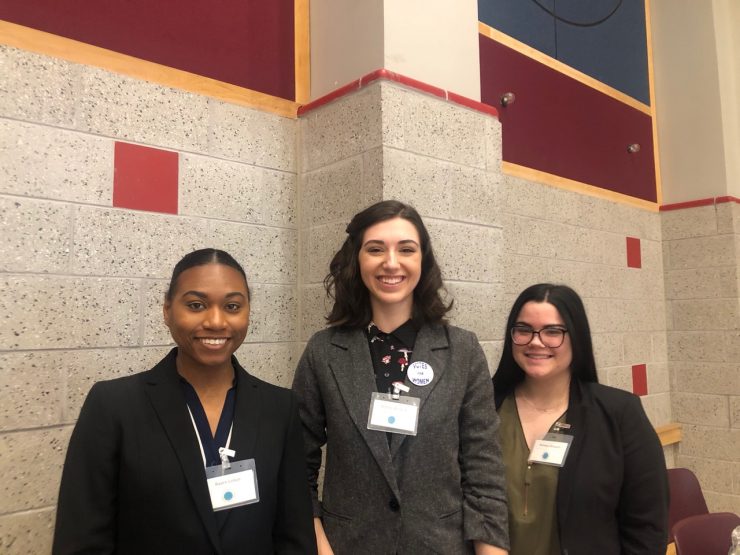 “We started this program because we wanted a way to get the public to see what women are doing in STEM fields and give women a chance to network,” said event co-organizer Kristine Horvat, also a Stony Brook University and WISE alumni. She added how it was satisfying to see more and more women in the program.

The event brought together women from academia, government, private sectors and up-and-coming young professionals to learn about women’s experiences in STEM fields. Lecturers and panelists discussed the impact of women in STEM careers, on the work environment and on the economy. “Being a part of this event is giving me more exposure to STEM-related things,” said Winnie Chen, a WISE freshman computer engineering major.

“I wish I had events like this earlier on because it helps change the mindsets of girls’ early on,” said Raven Linton, a junior chemical engineering major at University of New Haven.

The event consisted of a career panel, speed networking, topic tables, posters and science demonstrations. “Passports” were given to students and they received stickers for every scientific demonstration that they completed. One demonstration, “How to Become a NSLS-II Jr. Operator,” had students interactively participate.

“My favorite part about this event is meeting new people and seeing women in STEM networking with each other,” said Anna Goldberg, president of Brookhaven Women in Science.

Two demonstrations were run by three female students who happen to be the only three women out of ten students in a STEM class at the University of New Haven. “This event is so important because it’s overall an urgent issue that needs to be addressed,” said Brittany Danuard, a junior chemical engineering major at University of New Haven. “The event inspires me because I am one of only three girls in my chemistry class.”

The event opened up with guest speaker Cathy Cutler, Medical Isotope Research & Production Program Director at Brookhaven National Laboratory, who spoke about “How a farm girl became a scientist and impacted patients’ lives.” Other guest speakers included Shobhana Narasimhan, Dean of Academic Affairs at the Jawaharlal Nehru Centre for Advanced Scientific Research in Bangalore, India; and Carolina Jimenez Garcia, Senior Layout Artist at ScanlineVFX in Vancouver, Canada, who was the event’s closing speaker and discussed women in the film industry.

Garcia became a visual effects artist because it combines her love for science and art. She explained that in her computer graphics class in Madrid, only two out of the 30 students were women. Garcia has done work for Planet 51, Happy Feet Two and The Hobbit. After recently speaking to that same class in Madrid, she was impressed to see there were more women than men in the class. “I decided to give more talks about women in STEM fields because helping raise awareness is necessary,” said Garcia. She also spoke about the comparison of women versus men on screen, using a visual presentation of slides showing various statistics. “The concept of this program is amazing, and to women in STEM fields right now, I would tell them if anyone can do it, you can do it,” she added.

“Personally, I helped start this program because every time I went to a big conference, I felt discouraged being the only woman there, and I felt that I needed something that tells me how difficult it truly is for women in STEM,” said event co-organizer Vivian Stojanoff, who hopes that the program moves forward and makes change happen.