Stony Brook Takes on Depression With Support Services and Compassion 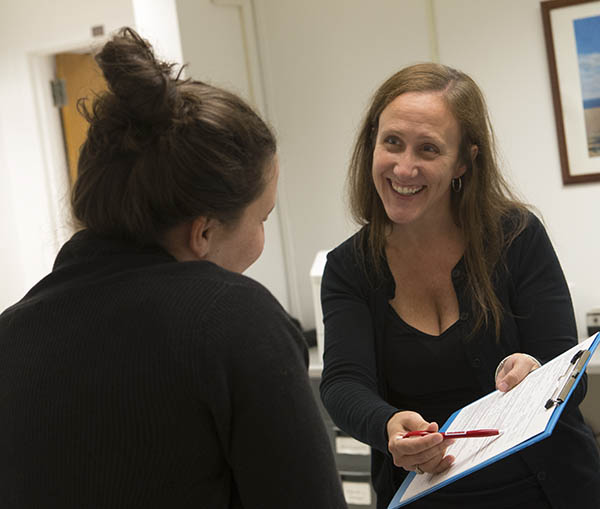 Raeltin Clavin ’18 is no stranger to depression — the mood disorder runs in her family and first surfaced for her in middle school. By the time she began studies at Stony Brook University, Raeltin had already seen several private therapists and knew that talking through her struggles helped to lighten the burden.

In the winter of her junior year at Stony Brook she wanted additional support. By then she was navigating the rigors of nursing school with little downtime, but a short walk from her residence hall was all it took to find a counselor.

“They provided me with someone I could be vulnerable with, who could also challenge my sometimes destructive ways of thinking,” said Raeltin, who graduated in May with her nursing degree. “I had a space to have important conversations that I didn’t always feel comfortable having with my friends or family. I feel lucky knowing I was surrounded with so much support.”

Raeltin is just one of more than 2,500 students to seek mental health support on campus this year. For more than 40 years, Stony Brook has worked to offer a wide variety of resources to help students learn about their mental health, develop healthy coping skills and recognize potential mental health concerns. Today, the University is working harder than ever, with dozens of licensed counselors and trainees providing support. Their care has expanded beyond traditional counseling alone —- the University now offers a host of programs, including meditation groups, clinics for specific issues, and pet therapy.

In recent years mental health has become a national concern and is increasingly a focus in higher education settings. The Center for Collegiate Mental Health (CCMH) reports that one in five college students lives with anxiety or depression, and in 2017, HuffPost reported that suicide is the second leading cause of death among college students. For young adults, college is often the first time they’re living away from home, free to explore who they are and what they aspire to be. But the transition to adulthood isn’t always easy.

The data also show that counseling can bolster students’ mental health over time. The CCMH study, which included more than 160,000 students at 147 colleges in the 2016–2017 academic year, showed that students who began counseling with high levels of psychological distress exhibited progressively lower levels of distress in assessments during the course of 10 counseling sessions.

Stony Brook University recognizes the stress students may feel during their time on campus, and the well-being of the University community is a top priority. Many options are available to those who are struggling or simply need someone to listen.

Julian Pessier, director for Stony Brook’s Counseling and Psychological Services (CAPS), said that there are mixed perspectives on data that show a spike in mental health crises among young people. “It could be a sign that more people truly are having psychological problems, but it could also mean that millennials are more willing to come forward for help than previous generations,” he said.

At Stony Brook, requests for help have doubled in the past two decades. Pessier said that 1,200 students contacted CAPS in 2000, and 2,500 reached out in the 2017–2018 academic year — nearly 10 percent of the campus population. “There’s a consistent 5 to 10 percent increase in the number of students we see each year, regardless of how many students are enrolled,” he added.

According to Pessier, traditional concerns such as academic performance or financial stress are common among Stony Brook students. But the diversity of the campus community also leads to unique issues. For example, many students are the first in their families to attend college, and some international students are responsible for helping their families integrate into American culture.

At CAPS, students are able to walk in without an appointment and immediately see a counselor. A brief, 15-minute conversation helps that counselor direct the student to the person and services best suited to their individual needs. CAPS employs a mix of 30 interns, mental health counselors, social workers, psychologists and psychiatrists. When the center is closed, calling CAPS will connect students to counselors at a national center who are educated about Stony Brook’s culture, community and resources.

While traditional one-on-one counseling is available, students also have the option to attend group therapy in several formats. Support groups provide a casual, “drop-in” atmosphere, while process groups are meant to develop closer bonds among students while exploring issues on a more intense level, Pessier explained.

The majority of CAPS’ services are meant to be used on a short-term basis, but there are other options for those who need longer or more focused care. The Leonard Krasner Psychological Center (KPC), located in the University’s Department of Psychology in the College of Arts and Sciences, offers mental health assessment and treatment for both students and members of the community. The clinic is staffed by advanced clinical psychology trainees who focus on treatment as well as groundbreaking clinical research. Roughly 250 people receive psychological services at KPC each year, half of whom are SBU students.

KPC Director Dina Vivian explained that although there is not a single cause for the development of psychological disorders, college students are a population particularly at risk.

“Many psychological disorders have their onset in adolescence or emerging adulthood. It’s a very difficult stage for [human development]. It’s also a period of cognitive maturation when beliefs and expectations about the self, the world and the future solidify,” she said. “It is also a critical time for using adaptive coping and emotion regulation. Any disruption and/or challenges in these processes place students at risk for experiencing psychological distress.”

The KPC offers individual, marital and family counseling, as well as 10-week small group sessions for patients who may struggle with issues — such as ADHD, social or academic anxiety and depression — that are prevalent in college populations. The KPC doesn’t accept health insurance, but it operates on a sliding scale. Stony Brook students will never pay more than $20 per counseling session and financial accommodations are provided as needed on an individual basis.

“We are here to offer affordable, accessible care that a student doesn’t have to leave campus to receive,” Vivian said. “We have students that we see sometimes for three years. Some see us for 10 or 20 visits and then just come occasionally.”

Each patient at the KPC fills out a weekly questionnaire that asks how they’re doing in a wide range of areas, from mood to sleep, social functioning and work. Suicidal thoughts or behaviors tend to develop gradually over time, and signs of recovery or deterioration can appear in subtle ways patients might not think to bring up in therapy, Vivian said. Identifying potential trouble areas quickly allows for early intervention where necessary.

“There is a lot being done for mental health on campus, but it needs to be a community-wide effort. People need to understand that mental health problems are understandable, treatable and nothing to be ashamed of. You don’t feel ashamed about seeking treatment for a toothache, so don’t feel ashamed to seek help for mental health,” Vivian stressed. “It’s about having a true, positive regard for people who are suffering, establishing a strong bond and letting people know that we care — that we’re going to weather this together.”