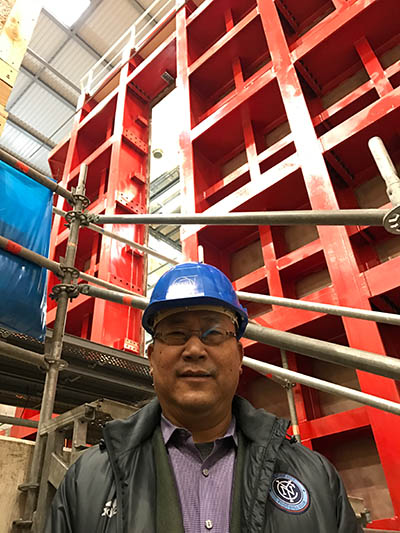 An extraordinary gathering of scientists and dignitaries broke ground on July 21, 1017, for the Deep Underground Neutrino Experiment (DUNE), a leading-edge, international experiment for neutrino science and proton decay studies in which Stony Brook University will play an important role.

Discoveries over the past half-century have put neutrinos, the most abundant matter particles in the universe, in the spotlight for further research into several fundamental questions about the nature of matter and the evolution of the universe — questions that DUNE will seek to answer.

Starting in 2014, Prof. Jung played a major role in the reformulation process of the Long Baseline Neutrino Experiment (LBNE) to the Deep Underground Neutrino Experiment (DUNE)/Long Baseline Neutrino Facility (LBNF). He was a member of the interim International Executive Board (iIEB), and chaired the committee that drafted the governance section of the DUNE Collaboration document. During 2015-2016, he served as DUNE Resource Coordinator, and currently serves as a DUNE Executive Committee (EC) member.

Earlier, the Stony Brook group worked on the 35t prototype of the planned DUNE far detector, a liquid argon Time Projection Chamber (TPC). Currently the group is involved in the DUNE far detector and ProtoDUNE-SP at CERN in the areas of cold electronics and field cage (led by Assistant Prof. Michael Wilking), and in the near detector design studies (Profs. Jung and McGrew).

DUNE will consist of two neutrino detectors placed in the world’s most intense neutrino beam. One detector will record particle interactions near the source of the beam, at the Fermi National Accelerator Laboratory in Batavia, Illinois. A second, much larger, detector will be installed more than a kilometer underground at the Sanford Underground Research Laboratory in Lead, South Dakota — 1,300 kilometers downstream of the source. These detectors will enable scientists to search for new subatomic phenomena and potentially transform our understanding of neutrinos and their role in the universe.

DUNE prototype detectors are under construction at the European research center CERN. The Long-Baseline Neutrino Facility will provide the neutrino beamline and the infrastructure that will support the DUNE detectors.