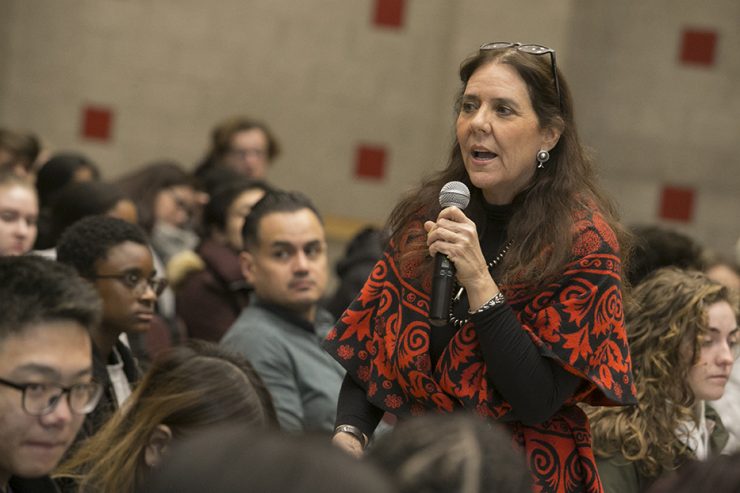 Frank is a Native foods historian, culinary anthropologist and educator from the Kiowan nation who visited Stony Brook University for Native American Heritage Month. She’s also the author of the James Beard Award winning book, Foods of the Southwest Indian Nations. She was joined by fellow chef Walter Whitewater from the Navajo nation.

More than 300 students, faculty and staff attended along with special guests from the local Native American tribes including the Shinnecock nation, who displayed Native American artwork and crafts, and the Unkechaug nation, who shared a prayer/blessing at the Open House.

Chef Frank has spent more than 25 years researching and analyzing native foods of Native American Tribes. During the seminar, Frank talked about the importance of traditions being passed down through generations in order to preserve them and have them grow. She said that Native Americans don’t usually get credit for the influence their cuisine has had, running down a list of items that the world wouldn’t have without them, including the “Magic 8” — corn, beans, squash, chiles, tomatoes, potatoes, vanilla and cacao. As Frank said, “Russia wouldn’t have vodka, Italians wouldn’t have tomatoes and the East wouldn’t have chilis to make spicy curry.”

A tragic outcome of Native American tribes being forcibly relocated is that many Native American dishes lost any prominence they had, as the tribes that made them were moved to unfamiliar territories with different resources than the ones they were used to. According to Frank, the loss of culture and tradition is, unfortunately, a fast process, “When we lose our food, we lose our traditions, and it only takes one generation to forget.”

Rediscovering the value of indigenous foods by “using teaching methods and strategies that inform on the history of native American foods, including agricultural practices, wild food harvesting techniques, food as medicine and methods to prepare native foods that inform decisions on health and wellness for community members” is key to building a better future stated Frank.

Sustainability was a concept engrained in Native American culture. Native Americans respected the land and honored the gifts from nature, and used this traditional ecological knowledge to ensure the next generation would enjoy the same abundance of resources. According to Frank, this concept is something that must be embraced today, “We must respect each other, respect ourselves and respect our land. Treat all life with a sense of beauty, power, meaning and sacredness. Honor and respect with gifts, gratitude and affection. We should also understand and use traditional ecological knowledge in order to better provide our surroundings with healthier options.”

During the lecture, she urged young people to help keep these traditions alive. “A new generation can modernize and reintroduce Native American cuisine. It starts with these new generations sharing their recipes and their food while adapting their traditional techniques with new technology.”

When speaking about diversity, Chef Frank drew a parallel to corn, “Growing up my mother always said that humans were all corn. She explained that like the colors on the medicine wheel, corn comes in yellow, white, black and red. Those colors symbolize the interconnectedness of people, cultures and foods.” She proceeded to explain, “Most of us today are speckled corn. We are all corn, we are all related to each other like the colors on the medicine wheel.”

After finishing her talk, attendees were given a chance to sample two dishes made for the event — Three Bean Stew with pinto, kidney and tepary beans and White Cornbread. Both were delicious and had the crowd going up for a second sample.