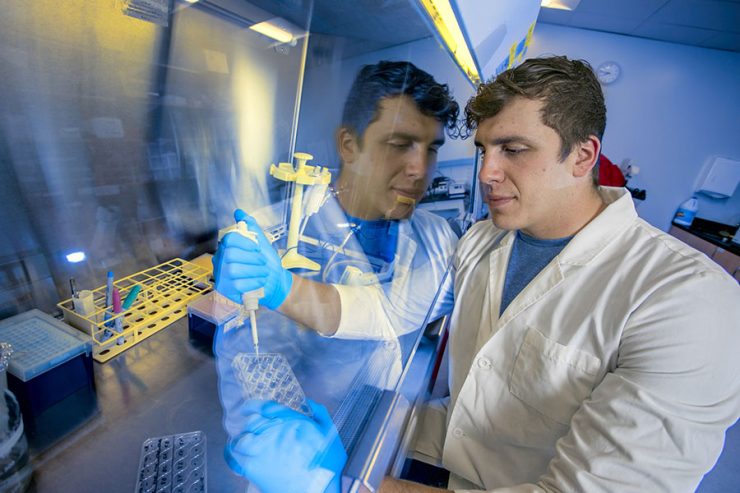 At 6-4, 290 pounds, Christopher Infantino has taken a lot of hits on the football field. The Stony Brook master’s student has suited up for football since he was five years old and is now playing his final season on the offensive line for the Seawolves.

As he gets ready to bid farewell to his gridiron days, Infantino is determined to give back to the sport he loves — as a researcher or surgeon.

The research that interests him most concerns Chronic Traumatic Encephalopathy, better known as CTE, a degenerative brain disease found in athletes, military veterans, and others with a history of repetitive brain trauma. In CTE, a protein clumps to slowly spread throughout the brain, killing brain cells and causing cognitive issues and personality changes.

Aside from football, Infantino has another personal reason to be highly invested in how the brain works. When he was 12 he went into a coma related to ADEM, or acute demyelinating encephalomyelitis —a rare autoimmune disease marked by a sudden, widespread attack of inflammation in the brain and spinal cord.

“I went from having flu-like symptoms to experiencing brain signaling abnormalities within two weeks,” he said.

According to Infantino, during the period following the coma he experienced “acute motor impairment with a few speech problems” that he was able to work through with three months of rehab. For three years following the coma, he had annual MRIs to make sure there were no lingering effects or debilitation.

He shared a love for football with his father, Joseph, who died in 2014, and has kept that connection alive by playing for Stony Brook.

“I’ve never had a concussion in my life,” said the Valley Stream native.

Infantino became a devotee of Chris Nowinski, co-founder and CEO of the Concussion Legacy Foundation, a non-profit organization dedicated to solving the sports concussion crisis through education, policy, and research. An All-Ivy Harvard University football team defensive tackle who later went on to wrestle professionally for World Wrestling Entertainment, Nowinski took a blow to the head that forced him to retire in 2003. He then wrote the groundbreaking book Headgames: Football’s Concussion Crisis.

Nowinski argues that, as dangerous as acute injury from concussions can be, repeated hits that do not manifest as concussions may be just as traumatizing to the brain.

Infantino credited the NCAA with making strides to give players “recovery time,” sandwiching breaks between contact watching films and lifting.

“I don’t know if every school does it this way but it’s very smart,” he said. “I’ve heard that the Dartmouth Football coach implemented tackle-free football in practices and noted a substantial drop-off in concussions.”

Infantino also has strong opinions about youth football. “We have enough research to know that young kids should not be playing tackle football while the brain is still developing. Fourteen and under should be flag football,” he said. “A number of states have started the process of making youth tackle football illegal.”

Infantino is excited about going for his masters in neuroscience in Professor Holly Colognato’s laboratory this fall, investigating the molecular mechanisms that control the development and function of oligodendroglia, which are specialized glial cells that are crucial for neural networks in the brain and spinal cord to operate at maximum speed and efficiency.

Infantino labels his decision to study CTE and brain injury science as “a gift to my future self,” adding, “I feel hypocritical but until there is greater progress made in protecting players of the sport that has given me so much joy I will have to be an advocate for playing other sports.”

The Seawolves finished third in the Colonial Athletic Association with a 7-4 record, earning a trip to face Southeast Missouri in the opening round of the 2018 NCAA Division 1 Football Championship.