Spring at the Wang Center 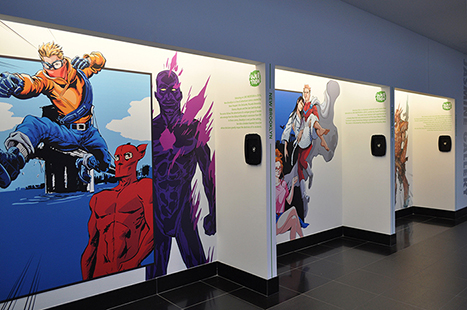 This spring the Charles B. Wang Center features lectures on the intersection of Buddhism and stand-up comedy, a theater production that explores what it’s like to be Muslim in New York City and a performance by one of the best taiko drum groups in Japan. Art exhibitions range from art that uses building as a canvas to Korean digital comics.

Visit the website for the full schedule of programs. All lectures, workshops and the annual Cherry Blossom Festival on May 1 are popular events, so book your space in advance.

Space Drawing by Sun K. Kwak
New York-based Korean-American artist Sun K. Kwak’s canvas is architectural space and her primary medium is black masking tape. Kwak achieves the effect of painterly strokes by tearing away the tape from surfaces of architectural spaces. Her sprawling freehand strokes weave designs over surfaces to dramatic effect. Kwak has created a long-term, site-specific installation at the Wang Center with lines that liberate the space and transform it into a new pictorial reality.

Shiva Ahmadi: Spheres of Suspension, Skylight Gallery
This exhibition — on view now through May 31 — features the lush, imaginative artwork of contemporary Iranian-American artist Shiva Ahmadi and includes work across a variety of mediums, such as painting, video and paper-based art. With a nimble point of view reflected through dexterous brush strokes, Ahmadi’s work wrestles with the global subjects of social trauma and corruption.

Webtoon: The Evolution of Korean Digital Comics, Jasmine Gallery, Video Gallery, Zodiac Gallery
South Korea’s entertainment landscape is shaped by a force that’s not widely known in the West — the webtoon — digitally based comics that range from comedies to dramas, from thrillers to romances and elaborate fantasies that can be enjoyed anywhere, anytime, online and on mobile devices. This exhibition, on view now through May 31, showcases the diverse genres of webtoons as well as webtoon-originated films and TV dramas, musical performances and souvenirs.

Related Lecture
Korea’s Digital Comics: The Evolution of Webtoon in a Global Context by Ernest Woo, Thursday, April 14, 1 pm, Theater
This lecture will introduce webtoons and explore their growth and how they formed during the last decade from the interaction of Korea’s comic book market, the global publishing industry and neighboring Asian influences. The talk will also consider network effects in what is considered the most wired country in the world, as well as the challenges webtoons face in reaching across borders to a potential audience of billions. Ernest Woo, an expert in Korean media and entertainment marketing, is co-founder and chief product officer at TappyToon.

Beyond Sacred: Voices of Muslim Identity, April 6, 6 pm, Wang Theater
Beyond Sacred, by Ping Chong and Company, is an interview-based theater production exploring the diverse experiences of Muslim communities within New York City. The five cast members share the common experience of coming of age in a post-9/11 New York, at a time of increasing Islamophobia. Participants come from a range of cultural and ethnic backgrounds and include young men and women that reflect a many different Muslim identities, including those who have converted to Islam, those who were raised Muslim but have since left the faith, those who identify as “culturally” Muslim, and those who are observant on a daily basis. The goal of Beyond Sacred is to use theater and personal testimony to foster greater understanding among Muslim and non-Muslim communities in New York and beyond.

Tickets at thewangcenter.org are $10 general, $5 students/seniors

Taiko Drumming and Dance Troupe, April 13, 6 pm, Wang Theater
One of the top-ranking taiko groups in Japan will perform thundering taiko drumming rhythms accompanied by traditional Japanese dance, with nearly 30 drummers and dancers taking the stage. Tamagawa University Dance and Taiko Group has been touring the world since 1961, visiting Mexico, England, Greece, Canada, Malaysia, Russia, Indonesia, Africa and the United States. This is their 12th Annual East Coast Tour, which takes them from Washington, DC, to Philadelphia and New York. Tamagawa University Dance and Taiko Group recently won third prize in a competition against 450 other groups at the Tokyo International Taiko contest.

Tickets at thewangcenter.org are $10 general, $5 students/seniors

It’s Funny Because It’s True: Buddhist Realism and the Dark Comedy of Louis C.K., April 15, 1 pm, Theater
Christopher Kelly explores comedy as a vehicle for truth, in particular the essential meaning of Buddha’s teaching on the four noble truths about suffering, the cause of suffering, the cessation of suffering and the path that leads to the end of suffering. He combines traditional Buddhist scholarship with a novel analysis of comedy sets from the likes of Louis C.K.

Laughing to Death: Overcoming Existential Anxiety with Buddhism and Comedy, April 16, 1 pm, Theater
Existential anxiety is often precipitated by a direct encounter with the ephemeral nature of life. Christopher Kelley explores both Buddhism and comedy as a palliative for existential anxiety. He argues that certain forms of dark comedy actually function in much the same way Buddhist discourse is intended to provide the individual with a more realistic view of life and death.

Sakura Matsuri: Cherry Blossom Festival, May 1, 12 pm to 5 pm, Theatre, Chapel, Lecture Hall I (rain or shine)
Welcome spring to Long Island with blooming sakura (cherry blossom), the exciting sounds of taiko drums, the elegance of Japanese dance and music, and a wondrous array of Japanese cultural exhibits and events for the entire family. The Wang Center will be filled with exciting activities including a short animation film screening, Ikebana flower arrangement, tea workshops, drawing manga comics, origami paper folding, kimono dress-ups, and cosplay for all ages. For tickets and more information about festival events, visit the website.

Confucius: His Thoughts About Food, May 4, 1 pm, Theater
China’s most famous teacher, philosopher and educator liked his rice polished and his meat cut properly and fine. He spoke about diet, food presentation, hygiene, integrity, heaven’s will and the way things ought to be. This lecture by Jacqueline Newman discusses Confucius’ life, his thoughts about food and the memorable meals served at the Kong Mansion. After the lecture related dishes will be tasted.

Ink Painting Workshop: Plum Blossom for Beginners, May 6, 13 and 27, 1 pm to 3 pm, Chapel
Through the three weeks workshop students will learn the proper use of the brush and watercolors, suitable paper, a wide range of brushstrokes, principles of composition, and the positive use of space, all of which are part of the dynamic nature and spirit of the medium. Emphasis will also be placed on technique, skill and discipline. Students will develop a deeper understanding and appreciation of traditional East Asian water-ink art.