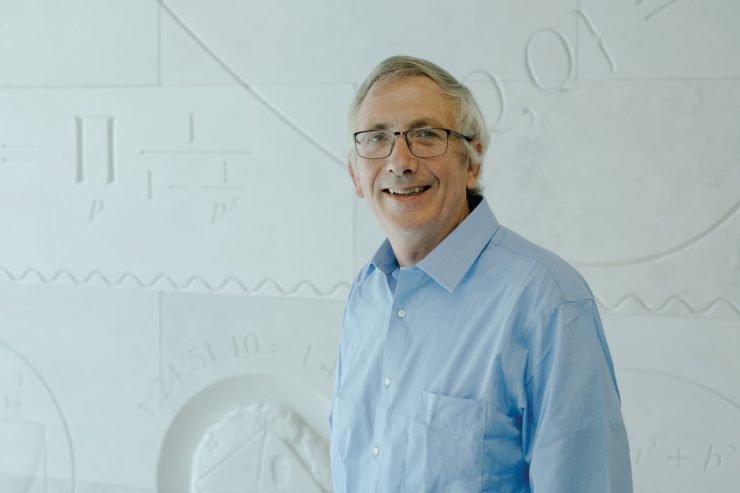 Sir Simon Donaldson, a permanent member of the Simons Center for Geometry and Physics (SCGP) and a professor in the Department of Mathematics, was recently named a recipient of the 2020 Wolf Prize in Mathematics for his contribution to differential geometry and topology. Professor Donaldson is jointly awarded the prize with Professor Yakov Eliashberg, Stanford University and Chairman of the Board of Trustees of the SCGP, for their outstanding contributions to mathematics over many years. The 2020 prizes will be awarded to nine laureates from six countries, including the U.S., England, France, Russia, Spain and Israel.

Professor Donaldson’s work has been a unique combination of novel ideas in global non-linear analysis, topology, algebraic geometry, and theoretical physics, following his fundamental work on 4-manifolds and gauge theory. Especially remarkable is his recent work on symplectic and Kähler geometry.

“A dedicated mentor and extraordinary scientist, Sir Simon Donaldson personifies excellence at Stony Brook University,” said Michael Bernstein, Interim President of Stony Brook University. “We are tremendously proud of his impact in the field of Geometry — and in both the Stony Brook Department of Mathematics and the Simons Center for Geometry and Physics.”

This is the 42nd year that the acclaimed Wolf Prize will be awarded by the Wolf Foundation, a unique and highly prestigious Israeli foundation that both celebrates and promotes exceptional achievements in the Sciences and the Arts worldwide. The prize is given every year to outstanding scientists and artists from around the world for achievements in the interest of mankind and friendly relations among peoples, regardless of race, religion, nationality, gender or political views and is a source of a worldwide pride.

“We are extremely proud of Simon Donaldson’s Wolf Prize in Mathematics,” said Minghua Zhang, Interim Provost and Senior Vice-President for Academic Affairs. “This is another testimony of the outstanding quality of research by our faculty in the Department of Mathematics and their impact in the discipline. Faculty honors in the Department now include two Fields Medals, three Wolf Prizes, nine Steele Prizes, four Veblen Prizes — the most prestigious awards in mathematics — and seven members of the National Academy of Sciences, among many more. Go Stony Brook!”

The scientific prizes are awarded in the fields of medicine, agriculture, mathematics, chemistry and physics. In art, the prize is awarded for painting, sculpture, music and architecture.  The laureates are selected by international juries that are reappointed every year and which consists of world-renowned professionals in their field.

Since the Foundation was established, 345 scientists and artists have won Wolf Prizes and approximately one-third of the Wolf Prize laureates ultimately received the Nobel Prize in areas shared by the two prizes.

The Wolf Foundation founded by the late Dr. Ricardo Wolf, an inventor, diplomat and philanthropist, and his wife, who donated their fortune to establishing the Foundation. The awards ceremony will take place in Jerusalem in June 2020.