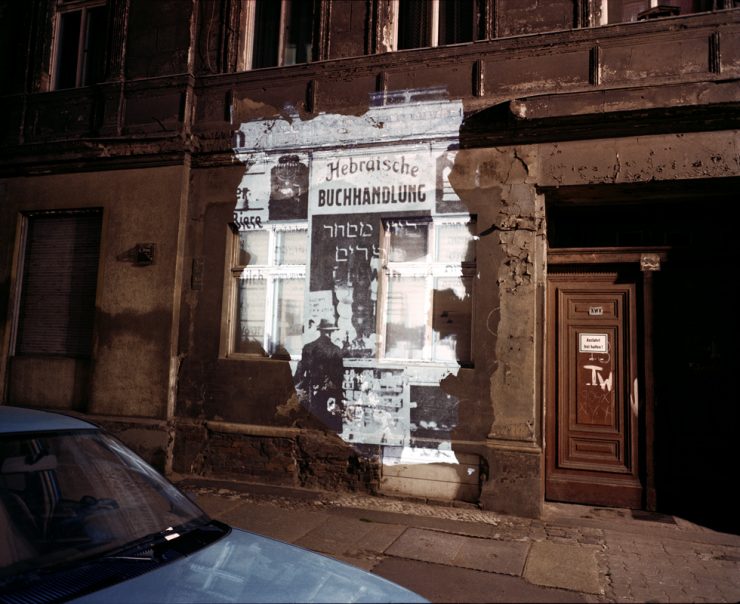 Made possible by an endowment from the Pollock-Krasner Foundation, the Charles C. Bergman Endowed Visiting Professorship in Studio Art was established in 2018 in memory of the Pollock-Krasner Foundation’s longtime and legendary Chairman and CEO and brings accomplished artists to the College of Arts and Sciences Department of Art to share their visions and inspiration with the next generation of young artists. The Foundation and Stony Brook University’s creation of this position celebrates Bergman’s commitment to the University and his lifelong devotion to the visual arts and artists and celebrates the legacies of Lee Krasner and Jackson Pollock.

“Shimon Attie is a leading visual artist who has extensive experience teaching at a University level, and the Pollock-Krasner Foundation is thrilled that in addition to being a recent recipient of the Foundation’s Lee Krasner Award, he has now been chosen as the inaugural Charles C. Bergman Endowed Visiting Professor of Studio Art,” said Ronald D. Spencer, Chairman and CEO of the Pollock-Krasner Foundation. “This position not only honor’s Charlie’s life and work, it also advances the legacies of Lee Krasner and Jackson Pollock, and we are grateful to Stony Brook University for partnering with us to establish this visiting professorship.”

“After an extensive online search process including a public talk, interactive teaching demonstration, and MFA critiques, the Department of Art is thrilled to begin working with Shimon Attie,” said Margaret Schedel, Associate Professor in the Department of Music and Chair of the Department of Art. “He will introduce students to his own mixed media community-led practice. We look forward to working with the Pollock-Krasner Foundation to bring a variety of professional artists to work with our students with the Charles C. Bergman Endowed Professorship.”

For two decades, Attie has made art that allows us to reflect on the relationship between place, memory and identity. In many of his projects, he engages local communities in finding new ways of representing their history, memory, and potential futures, and explores how contemporary media may be used to reimagine new relationships between space, time, place and identity. He is particularly concerned with issues of loss, communal trauma and the potential for regeneration.

“As an artist whose work focuses on issues of identity and community, Shimon Attie is perfectly placed to encourage our students to respond creatively to the forces shaping contemporary life,” said Helen A. Harrison, Director of the Pollock-Krasner House and Study Center. “I look forward to working with him on a project that will benefit from the Pollock-Krasner House and Study Center’s inspirational potential.”

“Shimon Attie’s practice is deeply steeped in issues of social justice, the reframing of histories and relations of power,” said Isak Berbic, Associate Professor and Graduate Program Director in Studio Art, Department of Art. “We look forward to the timely spirit Shimon will bring to the Department of Art, working with the contexts, and socio-political realities of our current social landscape.”

Attie’s work has been shown in group and solo exhibitions in museums and galleries around the world, including at The Museum of Modern Art, New York; Centre Georges Pompidou, Paris; The Miami Art Museum, and The National Gallery of Art, Washington, D.C., among many others. Recent solo exhibitions include the Saint Louis Art Museum (2017) and Madison MoCA (2019). Attie’s work is currently on view as part of a traveling exhibition, American Portraiture Today, organized by the National Portrait Gallery. Five monographs have been published on Attie’s work, most recently Facts on the Ground (Nazraeli, 2016).

Throughout his career, Attie has received numerous visual artist fellowships including from the John S. Guggenheim Memorial Foundation, the American Academy in Rome (The Rome Prize), The National Endowment for the Arts and The Radcliffe Institute for Advanced Study at Harvard University. He has received more than 25 commissions to create new works of art in more than 10 countries around the world. In 2018, Shimon Attie was inducted into the National Academy of Design.

“The Pollock-Krasner Foundation has been a staunch supporter of my work for many years, and I’m incredibly grateful to them for the resources they have provided to me and thousands of other artists over the years, allowing us to advance our practice,” said Shimon Attie. “I look forward to working with the extraordinarily talented students and staff at Stony Brook University over the course of this school year as we uphold not only Krasner and Pollock’s legacy but that of Charlie C. Bergman as well, who was at the forefront of bringing their vision for the Pollock-Krasner Foundation to fruition.”

The Pollock-Krasner Foundation, established in 1985 through the generosity of Lee Krasner, is a leader in providing resources to emerging and established artists. In addition to the creation of the Charles C. Bergman Endowed Visiting Professorship in Studio Art, the Foundation has provided nearly 5,000 grants totaling $79 million in 78 countries to working artists and visual arts organizations.