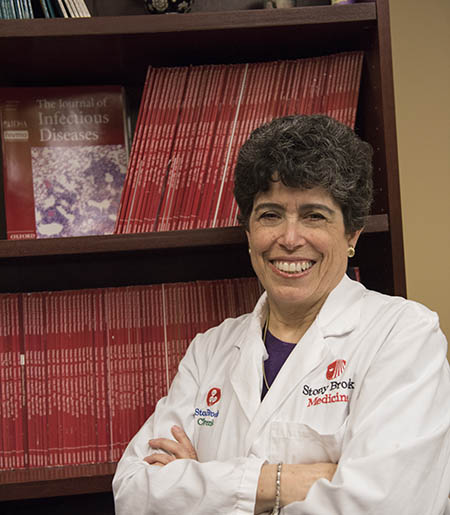 Flu season is already here, with more than 10,085 cases confirmed in New York State during the week ending January 4, 2020 alone, and a total of 32,848 cases for the season so far. According to Sharon Nachman, MD, Director, Division of Pediatric Infectious Diseases at Stony Brook Children’s Hospital, knowledge is one of the keys to illness prevention. Here’s her list of the top 10 flu truths she wants you to know.

1. Like clockwork, the flu arrives every year
And every year it causes people to miss work and kids to miss school. It sends many to doctors and hospitals and, for the most vulnerable among us, it can even cause death. According to the Centers for Disease Control (CDC), during the 2017-2018 season, influenza killed about 80,000 people – the highest death toll in 40 years. Among the children who got the flu, approximately 90% had not been vaccinated. Yet many people still avoid getting the vaccine for themselves and their children, putting their families and others at risk.

2. It’s Everywhere You Go
Supermarkets, schools, shopping malls. No matter where you go, someone near you has either just had the flu, has been exposed to the flu or has it right now.

3. It’s Very Contagious
The flu virus is very effective at infecting people. If someone with the flu coughs or sneezes near you, you could pick it up through the air. You can also get it by touching your eyes, nose or mouth after contact with a doorknob, the buttons on an ATM machine or the handle of a supermarket cart that was touched by an infected person.

4. It’s Coming Home from College
When students come home from college, where they live in close quarters with others, they tend to bring the flu with them.

5. It’s Especially Dangerous for Babies, the Elderly, and Those with Compromised Immune Systems
Newborns too young for the flu vaccine, older people for whom the vaccine isn’t as effective and people with compromised immune systems are especially at risk. While a normally healthy adult might get through a bout of the flu without too much distress, he or she could easily pass it on to a vulnerable person in their family, their workplace or on public transportation.

6. You Can Get Vaccinated Even if you’ve Recently Had the Flu
Each year there are different influenza strains that the vaccine is formulated to address. This season there are four strains. So even if you had the flu this season, if you weren’t vaccinated, you should be because it could help to protect you from picking up another strain.

7. The Vaccine doesn’t give you the Flu
The vaccine doesn’t contain any live virus so you can’t get the flu from it. If you get an injection, you may have a mild reaction such as soreness, redness, tenderness or swelling in the spot where the vaccine was given. If you get the nasal spray flu vaccine you may experience symptoms that are similar to having a bad cold. And keep in mind, there are many seasonal illnesses with symptoms that mimic flu symptoms, so you could get another illness after being vaccinated and just think you contracted the flu.

8. The Vaccine Can Prevent Hospitalizations and Death
While the vaccine may not prevent someone from getting the flu 100% of the time, it can lessen the severity of the illness, shorten its duration, and prevent hospitalizations and death.

9. After-the-Fact Flu Treatments are Not Very Effective
For those who do get the flu, certain treatments such as antivirals may help lessen the length of the illness in some people by only a day. According to the CDC, they work best when administered within two days of getting sick. The best approach however is vaccine, which may help you to avoid the flu completely.

10. It’s Not Too Late to Get Vaccinated
While it’s ideal to get vaccinated by mid to late fall, as long as flu viruses are circulating, you’re still at risk. Even if it’s January or later, if you haven’t been vaccinated, go and get your shot now.

Remember, protecting others and ourselves from the flu is an important responsibility. To make an appointment to have your child vaccinated at Stony Brook Children’s, call (631) 444-KIDS (5437). To find a flu vaccine clinic near you, contact your physician’s office or local pharmacy.