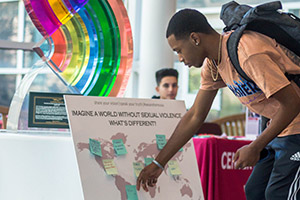 One in five women and one in 71 men will be the victims of sexual assault at some point in their lives.

The Center for Prevention and Outreach (CPO), in collaboration with other campus organizations, will be holding weekly events in order to discuss sexual assault for Sexual Assault Awareness Month (SAAM) this April.

The National Coalition Against Sexual Assault first established SAAM in 2001 after initially observing only a week for sexual assault awareness. The movement to raise awareness about sexual assault and support for survivors began as early as the 1970s.

Every Wednesday from 12 pm to 3 pm, CPO will be collecting student submissions in the SAC WHY lobby for a creative piece that is meant to envision what it would be like to live in a world without sexual violence. The finished piece will be unveiled near the end of the month.

Also on Wednesdays upstairs in SAC 310 from 3 pm to 4 pm, CPO will be holding weekly Green Team meetings for students to learn more about opportunities to support Stony Brook’s Green Dot program, a training meant to give students the tools to recognize sexual assault and intervene. Green Team meetings will also include information on other violence prevention and bystander intervention efforts on campus, and how you can get involved in upcoming events, trainings, and activities.

On Thursday, April 19, at 4 pm, CPO will be holding, “Healing Arts: Self-care for Survivors and Supporters,” an event to explore the role of self-care and creative expression in healing after sexual trauma.