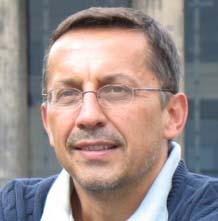 “Each year it is an honor to review the collective work of SUNY’s outstanding faculty and to recognize the sheer academic strength within our walls that inspires our students,” said SUNY Board Chairman H. Carl McCall. “The standards of our distinguished ranks are rigorous, with high demands set for leadership and innovation. Congratulations to all of today’s honorees, who have led our students by an excellent example, created new research opportunities and challenged those around them to reach higher levels of achievement.”

“SUNY faculty achieving the distinguished ranks provide an additional spark that inspires groundbreaking research, innovation and discovery while also setting a higher standard for teaching and learning,” said SUNY Chancellor Nancy L. Zimpher. “Congratulations to all of the faculty receiving this honorable distinction.”

The Distinguished Professorship is given to individuals who have achieved national or international prominence and a distinguished reputation within a chosen field. This distinction is attained through significant contributions to the research literature or through artistic performance or achievement in the case of the arts. The candidate’s work must be of such character that the individual’s presence will tend to elevate the standards of scholarship of colleagues both within and beyond these persons’ academic fields. Receiving this rank from Stony Brook are:

Professor Petar M. Djuric, Chair of the Department of Electrical and Computer Engineering, is a world-leading scholar in signal processing with numerous contributions impacting the field. In particular, his pioneering work in sequential Monte Carlo sampling and model selection is of groundbreaking caliber and truly outstanding. It finds applications not only in engineering, but also in almost any branch of science where randomness, uncertainty and inference from observed data and mathematical models are of essence. Examples include understanding gene networks and their topologies, predicting weather patterns with improved degrees of accuracy, estimating unknowns from biomedical signals, quantifying the effects of ionization in radiation, understanding information diffusion and rumor spreading in social networks, and managing risk in finance. His contributions have been recognized by international scholarly and professional bodies with a number of highly prestigious awards and honors. He has mentored 37 PhD students, has been editor-in-chief of a prestigious journal, distinguished lecturer of IEEE, and fellow of both the Institute of Electrical and Electronics Engineers (IEEE) and the European Association for Signal Processing (EURASIP). His work has made Stony Brook University a leading center in Monte Carlo-based signal processing.

Professor Frederick E. Grine, a member of the Department of Anthropology, is one of the world’s foremost paleoanthropologists, and he is widely acknowledged as having made substantial contributions to our understanding of how human beings and their relatives evolved. A leading authority on that group of hominins from the Pliocene and Pleistocene in Africa known as the robust australopiths, Professor Grine is also an acclaimed expert on the emergence of Homo sapiens in the Late African Pleistocene and a pioneer in the analysis of microscopic traces left by food on the chewing surfaces of molar teeth. He has published four books, 164 articles, and more than 100 abstracts, reviews, and conference presentations. His 2007 Science article was recognized by Time magazine as one of the top ten scientific news stories of the year. Professor Grine has obtained nearly $1 million dollars in grants and has received recognition from prestigious institutions, such as the University of Cambridge, where Clare Hall awarded him a visiting professorship and elected him a life member, and the Leverhulme Centre for Evolutionary Studies made him a Leverhulme visiting professor.

Professor Mikhail Lyubich, a member of the Department of Mathematics, is one of the world’s top researchers in the field of low-dimensional dynamical systems. He has made numerous deep and influential contributions to many aspects of this important field, which brings together ideas from many seemingly distinct areas of mathematics and has important applications to many areas of science, including physics, economics, computer science and biology to mention a few. Dr. Lyubich’s most major contributions can be combined under the heading of “Renormalization,” and he is an undisputed leader in this important direction of research. His scholarly achievements include a Guggenheim Fellowship, the Jeffery-Williams Prize of the Canadian Math Society and two invitations to speak at the International Congress of Mathematicians. He provides indispensable service to a broad mathematical community by organizing programs and conferences, and editing and refereeing for numerous math journals. He has worked tirelessly to elevate mathematics at Stony Brook University and in particular, the Institute for Mathematical Sciences (IMS), of which he has been director for the past nine years. During the past three years, the IMS has been recognized throughout the world as a leading center for research in dynamical systems.

Professor Scott M. McLennan, a member of the Department of Geosciences, is a world-class geochemist whose contributions have made him a leading figure in the study of the Earth, and later Mars. While doing so, he proved himself to be an extraordinarily successful mentor to some of the leading geochemists of the next generation. Early in his career, he quite literally wrote the book on the evolution of the Earth’s crust. Still an essential reference after 30 years, this text paved the way for decades of productive research by many scientists. His ongoing insights into the potential of sedimentary rocks to serve as preserved, homogenized records of bulk crustal chemistry led Professor McLennan to discover profound changes in that chemistry early in our planet’s history, illuminating broad questions of Earth’s tectonic, atmospheric and climatic evolution. During the past decade and a half, Dr. McLennan has focused his research on Mars. He and his students have been instrumental in using rover data to unravel the hydrological and climatic history recorded in Martian rocks. In the process, he has established himself as a leading figure on the Mars Rover teams and has become widely regarded as the leading senior-level planetary geochemist in the country.

Professor Kathlyn A. Parker, a member of the Department of Chemistry, is an internationally known scholar in the field of organic synthesis. Her research contributions include numerous demonstrations of new methods and strategies that set standards for the efficient construction of novel and important “small molecules” (drug-like molecules). Her more than 130 research papers and reviews in high-profile journals have garnered more than 1,600 citations. Dr. Parker has received two major awards from the American Chemical Society (ACS) and several fellowships for career advancement; she is a fellow of the ACS and a fellow of the American Association for the Advancement of Science (AAAS). She has mentored 45 PhD students, eight MS students, five postdoctoral researchers, and more than a dozen undergraduate research students, and led a project on graduate education in chemistry. She has served in leadership positions in the ACS and provided service to the NIH, NSF, AAAS, the American Cancer Society and the National Academy of Sciences.

Professor Fotis Sotiropoulos, Dean of the College of Engineering and Applied Sciences, is one of the world’s leading researchers in simulation-based engineering science for cross-disciplinary fluid mechanics problems in renewable energy, environmental, biological and cardiovascular applications. Funded by NSF, DOE, NIH, the Sandia National Laboratories, private industry, and other state and federal agencies, Professor Sotiropoulos has raised more than $25 million in externally sponsored funds for research and research facility development and renovation. He is a fellow of the American Physical Society (APS), has authored more than 160 peer-reviewed journal papers and book chapters, has twice won the APS Division of Fluid Dynamics Gallery of Fluid Motion (2009, 2011), and is a recipient of a CAREER Award from the National Science Foundation. His research results have been featured repeatedly on the covers of prestigious peer-reviewed journals in fluid mechanics. He is also a 2014 distinguished lecturer of the Mortimer and Raymond Sackler Institute of Advanced Studies at Tel Aviv University and is serving or has served on the editorial boards of several journals. He is a 2017 recipient of the Hunter Rouse Hydraulic Engineering prize from the American Society of Civil Engineers (ASCE)

The Distinguished Service Professorship honors and recognizes extraordinary service. Candidates must have demonstrated substantial distinguished service not only at the campus and the State University, but also at the community, regional and state levels. Further, many candidates for appointment have rendered influential service contributing at the national and international levels. Service must exceed the work generally considered to be a part of a candidate’s basic professional work and should include service that exceeds that for which professors are normally compensated. It must also extend over multiple years and, very importantly, must involve the application of intellectual skills drawing from the candidate’s scholarly and research interests to issues of public concern. Receiving this rank from Stony Brook is:

Professor John Peter Gergen joined the Department of Biochemistry and Cell Biology in 1989. Since that time, he has developed an exceptional record both of scholarship in his field and of service to the undergraduate and graduate students of the University. He served as an associate dean of the Graduate School from 2005 to 2008, during which time he was involved in efforts to expand the pool of graduate applicants and diversity of the graduate students. He remains active in these efforts and is the principal investigator on a large NIH grant that provides support for underrepresented and disadvantaged students, at both the undergraduate and graduate levels, to develop careers in biomedical research. As director of Undergraduate Biology since 2010, Dr. Gergen has spearheaded a number of initiatives to improve guidance and counseling services, to upgrade the teaching laboratories and to increase opportunities for research experiences. He has also led outreach efforts to Biology alumni and been actively engaged in working with other professors lo improve and incorporate new teaching modalities into their courses. Dr. Gergen has had national impact on efforts to improve biology education. He was an organizer and serves on the Leadership committee for the National Academy of Sciences/HHMl Summer Institutes on Undergraduate Education in Biology, held annually at different sites around the country.