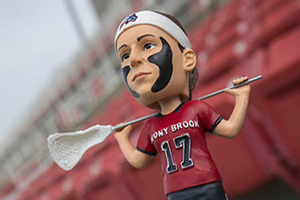 Stony Brook women’s lacrosse defeated a nationally-ranked opponent for the seventh time this season, topping No. 22 Johns Hopkins, 15-7, in front of a record crowd on Kylie Ohlmiller Bobblehead Night at LaValle Stadium on Friday.

“This was a dangerous game,” said head coach Joe Spallina. “Johns Hopkins is a very good team. The crowd was buzzing tonight; it was an incredible atmosphere for a college lacrosse game.”

When you score a goal like this on your own bobblehead night, you earn an #SCTop10 spot.
#SeawolvesUnited | #NCAAWLAX | #AEWLAX pic.twitter.com/g7w7dwq2to