Seawolves and Fans Get Ready for Fall Sports 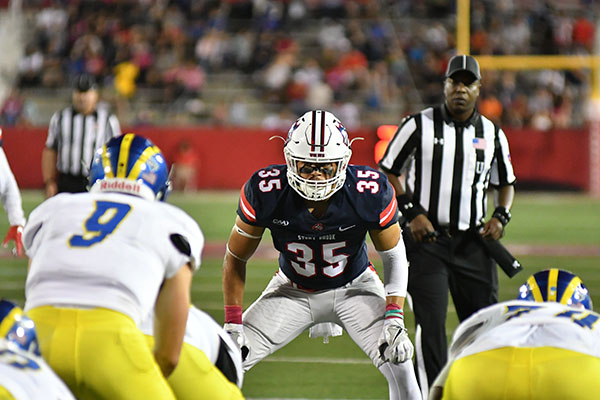 Seawolves fans should have a lot to cheer about this fall. Here are three reasons why:

The Seawolves finished 10-3 in 2017, earning a second-place finish in the nation’s most competitive conference (CAA Football), an 11th overall ranking in the national polls and a quarterfinal appearance in the NCAA Division 1 FCS playoffs.

This fall, the team returns to the gridiron with 20 seniors. The offense will feature 10 seniors and eight returning starters including quarterback Joe Carbone, who last season posted one of the best QB seasons in Stony Brook history, and 2017 First Team All-American tight end Cal Daniels.

Sixth-year senior and captain John Haggart, who sat out with injuries his first two seasons, will anchor the defense. He has recorded a trifecta of sacks per game on two occasions in his Stony Brook career.

Other defensive standouts include senior captains Shayne Lawless and Noah McGinty. The linebacking duo combined for 188 total tackles in 2017.

Soccer
Poised to make noise again this autumn is the Stony Brook women’s soccer team, which went 11-11 last year, topping Vermont 2-1 in the America East Championship and earning their first trip to an NCAA Tournament since 2013.

Men’s soccer, led by coach Ryan Anatol, are coming off a 7-6-5 season that culminated in their fourth straight America East postseason appearance. The Seawolves won five of their first seven contests last year, including posting a 5-2-4 mark at LaValle Stadium. The men’s soccer program will look to its three seniors (Martieon Watson, Serge Gamwanya and Steven Ghitis) to lead the way in 2018.

Last season was noteworthy for first-year volleyball coach Kristin Belzung, who guided the Seawolves to their first NCAA Tournament appearance after the team captured the America East championship with a pair of sweeps over the top two teams in the conference, Albany and Binghamton, respectively.

Senior middle blocker Mckyla Brooks, who was named America East Championship Most Outstanding Performer while garnering All-Conference team honors, returns for the 2018 season along with three of her fellow All-League teammates. Junior setter LeAnne Sakowicz was named to the America East All-Conference Second Team along with junior outside hitter Maria Poole. Sophomore libero Kiani Kerstetter is coming off of an impressive debut, earning America East All-Rookie Team honors in her first season with the Seawolves.

The women, fueled by Melian, senior Tiana Guevara, and juniors Annika Sisson and Alexandria Ortega, are coming off a third-place finish at the America East Championship, missing second place by a single point.

Avery noted, “We now sit on the verge of an historic America East three-peat and clinching our first-ever berth in the NCAA championship race.”

All things considered, the autumn athletics schedule promises to yield a bountiful harvest if you happen to be a Seawolves fan.