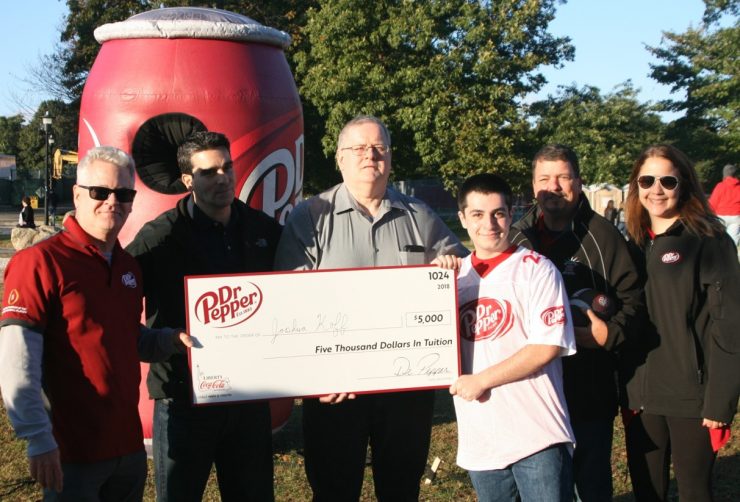 When Stony Brook won the Homecoming Game on Oct. 20, 2018, Seawolf Joshua Koff  ’21 had an additional reason to celebrate. He was the winner of Dr. Pepper’s Football Toss Tuition Giveaway program, which brought him the grand prize of $5,000 to be applied to next semester’s tuition.

Koff, a Political Science major in the College of Arts and Sciences, found out about the contest while at West Side Dining’s convenience store, “I saw the promotional stickers on the beverage fridge’s door and immediately texted the number to enter the contest” said Koff.

He received the call announcing he was one of six finalists for the football toss the day after Fall Break. This seemed like a great opportunity to earn extra money for tuition, so in the days leading up to Homecoming, Koff enrolled the help of his roommate, Aaron John’ 21, to help him practice his football toss.

The rules of the contest were simple. To win, Koff had to toss a football into an inflated oversized Dr. Pepper can, throw the football into the hole with every hit counting as 1 point. The participant with the highest score would win the grand prize. Each finalist went individually. In the first round, Koff shared the lead with another participant; however, during the tie-breaker round, Koff hit 4 points, while his opponent hit only 3.

Koff is ecstatic to have won the grand prize, “I really did not expect to win this. I was happy to be included in the contest, but now I have $5,000 for tuition for next semester, and those are $5,000 I don’t have to worry about.”

In addition, Koff’s win was recognized during the football game. During the break between 1st and 2nd quarter, he was called onto the field to pose for a photo opp with the novelty check. “A few of my friends saw me on the Jumbotron. They texted me to say they saw me on the big screen,” he said.

Koff wasn’t the only winning Seawolf that night. Emily Chen ’19 was another participant that won $500 for tuition.

The Coca-Cola Partnership
Stony Brook entered a partnership with Coca-Cola this summer. After a competitive bid process managed by the Faculty Student Association (FSA), Coca-Cola was chosen as the partner for Stony Brook, as they provided more student scholarship opportunities, multi-million dollar sponsorship funding, and a higher level of beverage service.

According to Maryanne Reinhardt, FSA’s Chief Financial Officer, “This is a great example of how FSA’s partnership with our vendor brought direct support to our students. Going to college represents a large expense for every student, and at FSA we are cognizant of this and are always looking for ways to remove barriers for student success.”

Stony Brook Athletics was also a strong supporter of this initiative and hosted the event in the Seawolves Town. “We were delighted to host this event with our friends from Dr. Pepper during Homecoming weekend,” said Shawn Heilbron, Director of Athletics.  “Coca-Cola is an outstanding partner for Stony Brook University, and we look forward to many more of these exciting promotions in the future.”