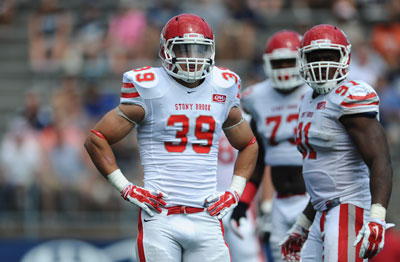 Talent can only take an athlete so far. Christian Ricard ’14 knows it all too well — players need to make the most of their opportunities to make it to the top.

Christian, who graduated in December, was once a star high school football player from Worcester, Massachusetts, with enough credentials to interest many colleges. He was his team’s captain, MVP, special teams MVP, the league’s defensive MVP, a Shriners All-Star and a member of the Telegram & Gazette Super Team.

But all that only scored him was the interest of a few small Division II and III schools.

He was also an excellent baseball player and his high school diamond coach pushed him to attend Franklin Pierce College in New Hampshire on a baseball scholarship. But Christian preferred football to baseball, where a slump can last weeks and erode a player’s belief in his abilities. He was at a crossroads common to many two-sport athletes who are forced to choose just one.

Then, his path became clear. After the last football game of his high school career, a coach from Division I Stony Brook offered him a place on the Seawolves as a preferred walk-on, meaning he would not receive a scholarship but would make the team without having to try out.

Although football was what made Christian focus on Stony Brook, he knew football would not last forever.

A school that combined an exceptional education with a solid athletics program at an affordable price seemed a better investment for Christian, and Stony Brook fit that description.

“Stony Brook was willing to take a chance on me and I wanted to make sure they would not regret that decision,” he said.

So Christian put in the work to prove himself both on and off the field. As a redshirt freshman, he could practice and train with the team but not compete in games until his second year at Stony Brook. That gave him a chance to gain weight, learn the system and maintain his eligibility until his first college game.

“In high school, football is a sport. In college, it’s a job,” he said. “As a student-athlete at Stony Brook I would be at school for workouts at 6 am and not get home until 9 pm. That day would consist of workouts, class, meetings, film review, practice, more meetings, and then mandatory (ten hours a week) study hall.”

Another challenge for Christian was his size. He came to Stony Brook weighing only 175 pounds. Entering his sophomore campaign, he bulked up to 205 thanks to a change in diet and extra time in the weight room.

“Putting in all of this extra work made it possible for me to compete for a starting position,” Christian said. “I was not the best athlete on the team but I worked as hard as I could to make sure I could contend with those athletes who are more gifted.”

That hard work earned him a full athletic scholarship beginning in his sophomore year.

Christian tailored his major to his rigorous athletic regimen as well, choosing to pursue a bachelor of science degree in technological systems management, which prepares students for careers in government, industry and education — for positions such as quality control specialist, environmental analyst, technical sales representative and technology trainer/educator.

“Ideally I would like to be a project manager for a company,” Christian said. “A technology-related major gives me an advantage over someone who only knows the business side of the job.”

He said that a common freshman pitfall is to consider yourself an athlete rather than a student-athlete.

“Once you realize what you want to study, it makes classwork much easier. I learned what my teachers expected and knew the amount of time I would need to dedicate to my academics. That did not include late nights watching TV or partying.”

Armed with that knowledge, Christian maintained a 3.3 GPA, and a perfect 4.0 in his last semester while the football honors were simultaneously rolling in.

A key member of the football team’s defense —as a rover, a safety/linebacker hybrid — Christian led the team in tackles as both a junior and a senior, and totaled 242 tackles for the Seawolves placing him fourth all-time in the program’s Division I history.

His other honors include:

Christian credits his position coach Lyle Hemphill as one of the main reasons for his football success.

“He prepared more than anyone I had ever seen in my life,” he said. “He watched more film than I thought was possible. By the end of a game week he could tell what play the other team was going to run before they ran it themselves.”

Coach Hemphill’s positive influence helped Christian off the field, too.

“In the classroom I would model his dedication to preparation when doing a project. With my major, we were always in groups doing presentations. I would make sure I was as prepared for that presentation as I could be so I could speak confidently in front of my peers.”

Christian is considering working for Raytheon, where his cousin is an engineer. The irony is not lost on him.

“It’s funny, because when he told me that Raytheon is a defense company I thought, ‘Perfect, that’s what I do.’ ”

—By Glenn Jochum; Photos by John Griffin and Steve McLaughlin 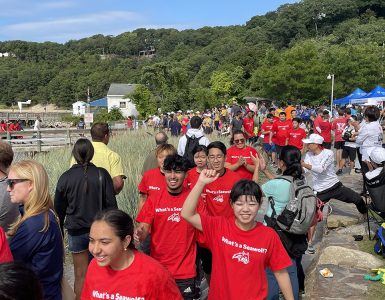