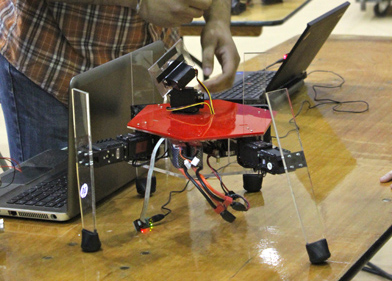 The Stony Brook Robot Design Team came in first place with their robot, Ampu-Tina, in the Mech-Warfare category at ShepRobo Fest 2013, which was held from March 30 to 31 at Shepherd University in West Virginia. Team members include Asheik Hussain, team president; Angad Sidhu, secretary; Cade Dong, treasurer; and Phillip Prestia, mechanical team leader. This is the first year that Stony Brook has competed at the competition.

ShepRobo Fest, the official East Coast Mech-Warfare robotics competition, began in 2010 with a three-year, $100,000 grant, focused on preparing students for tomorrow’s emerging technological industries. A key component of the grant is sponsoring an annual robotics competition for elementary to college-level students. ShepRobo Fest aims to increase younger children’s interest in the STEM (science, technology, engineering and math) disciplines while giving students a chance to apply the knowledge that they gain in the classroom to the real world.

In the Fire-Fighting competition, the team was required to make an autonomous robot that navigates its way through a series of rooms and finds a candle. When the candle is found, the robot must destroy the fire. In the Mech-Warfare competition, the team was required to make either a four- or two-legged robot that walks and shoots plastic pellets at other robots. Each robot has four targeting plates that are attached to them, which are used to keep count of how many times a robot is hit. At the end of each match, the robot with the fewest hits on its plates wins and moves onto the next match.

“These competitions were fun and a great learning experience,” said Asheik Hussain. “During the day, we had young children come to our table and curiously look on at us soldering circuits and writing code. 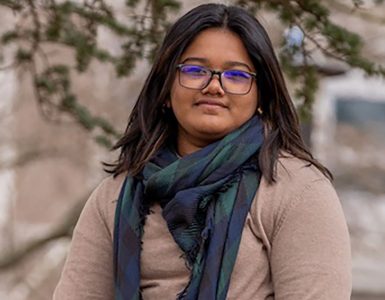