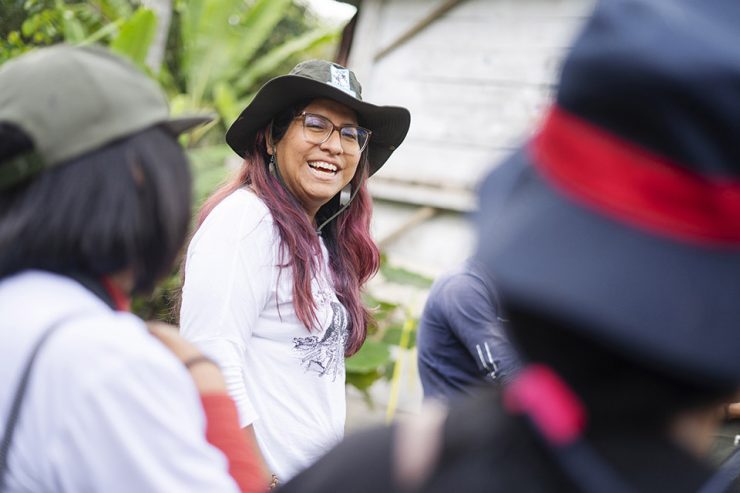 Fanny Cornejo Is One of Ten Students Who Could Win $50,000 to Advance Her Work

Peruvian biologist Fanny Cornejo, a graduate student in Stony Brook University’s Interdepartmental Doctoral Program in Anthropological Sciences (IDPAS), has been named one of ten finalists for the newly created Emerging Conservationist Award from the Indianapolis Prize, the world’s leading award for animal conservation.

This inaugural award of $50,000 recognizes professional wildlife conservationists, biologists and scientists under 40 years of age working to make strides in saving animal species from extinction. The first Emerging Conservationist Award winner will be announced in April 2023 and will be recognized at the 2023 Indianapolis Prize Gala on Sept. 30, 2023.

Cornejo is a primatologist, anthropologist and director of Yunkawasi, an organization that works with Amazonian and Andean communities for the conservation of threatened species through sustainable economic development and a protected area management approach. She is also executive director of the Rainforest Partnership in Peru, Yunkawasi’s strategic partner for conservation and sustainable development activities in Peru.

Cornejo’s faculty mentors in the College of Arts and Sciences are Distinguished Service Professor Patricia Wright, Herrnstein professor of conservation biology in the Department of Anthropology, and Professor Liliana Davalos, Department of Ecology and Evolution. Wright was awarded the Indianapolis Prize in 2014.

“The Emerging Conservationist Award supports the next generation of conservationists who are actively making a positive difference for the future of biodiversity,” said Rob Shumaker, president and CEO of the Indianapolis Zoological Society, Inc. “These finalists, along with all of the prize honorees, share a deep commitment to protecting nature and inspiring people to care for our world.”

The Indianapolis Prize recognizes the world’s leading conservationists whose work provides future generations with replicable and actionable conservation practices. The finalists of the Emerging Conservationists represent the people we can rely on to save species around the world. Finalists were selected through a two-stage selection process, where a review committee evaluated and then narrowed the application pool to 10 finalists who are then sent to a selection committee to choose a winner.

Stony Brook University has an ongoing history with these important awards. In addition to Professor Wright, Professor Russ Mittermeier received the award in 2018 and Professor Carl Safina was named a finalist in 2016.