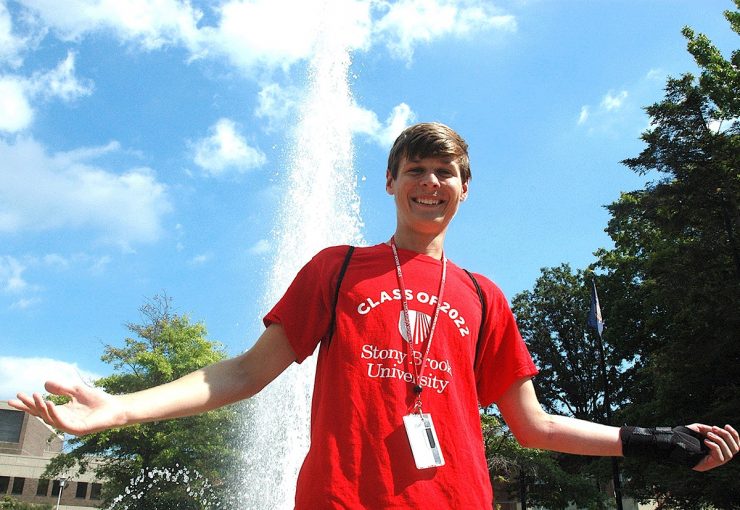 A little more than a year ago, Ryan Magill’s life was smooth sailing — literally. Then a horrific accident changed the youth sailing instructor’s life forever. But if you hear him talk about it, that accident might actually have saved his life.

The Stony Brook University freshman was working his normal shift at a local yacht club on Moriches Bay, assigned to a 13-foot Boston Whaler on the final day of the summer season.

As he stood toward the port bow of the boat, his friend turned the vessel quickly, which caught him off balance and sent him overboard directly into the boat’s rusty propeller.

“I recall frantically pleading for help as I bobbed in the water, kept afloat by my life jacket,” said Ryan. “My left arm was shredded to the bone, motionless and covered in blood. Co-workers dragged me onto a nearby boat as I fumbled for words and my consciousness faded. I recall the muffled sound of my long-time best friend Jillian and another co-worker Katlyn screaming for me to wake up and squeeze their hands. Katlyn tied my arm tight with a tourniquet of shirts and towels. I actually saw the bright, white light typically associated with dying. ‘I won’t die now,’ I triumphantly screamed within the confines of my brain.”

In the midst of this, Ryan, who is a School of Journalism and Political Science Major with a wicked sense of irony, asked Jillian, “Do you think this is newsworthy?”

Within minutes, the paramedics arrived and Magill was transported via helicopter to Stony Brook University Hospital, where a surgical team performed trauma surgery that saved both his life and his arm. During the accident he had severed his left brachial plexus nerve, radial artery and left pectoral muscles, in addition to other injuries, and required a nerve graft in an additional surgery just a few weeks later.

“My co-workers have rightfully received praise from the entire community as lifesavers,” Ryan said.

In between surgeries, facing a long recovery, Ryan was devastated by another development — a diagnosis of Type 1 diabetes.

His mother, Heather recalled her son telling her he thought he could handle one issue or the other but not both simultaneously. “Boy, was he wrong,” she said. “He researched the condition, steps to managing the disease and emerging technological advances and devices that make living with diabetes easier. He mastered mathematical equations for determining insulin units and quickly learned to count carbohydrates while satisfying his teenage appetite. He even figured out a way to test his own glucose despite the limited mobility of his left hand. His positive spirit prevailed although he had every reason to be angry or pity himself. He told me that if the propeller didn’t kill him he certainly wasn’t going to let diabetes do it.”

Ryan said, “As a family, we took it piece by piece. We attended diabetes classes and worked collaboratively. Now it is part of my daily life. I wear a continuous glucose monitor (CGM) and that provides me with glucose levels every five minutes and is transmitted to my phone Ryan Magill via Bluetooth connection. Because I use the CGM I get feedback on how my pancreas reacts to certain foods. It does not do well with bagels and highly processed foods. And I exercise daily.”

Ryan has a multitude of reasons for winding up at Stony Brook. In addition to his experience with the surgery team and the care he received in the aftermath of injury from Stony Brook Medicine staffers Dr. Alexander Dagum, his PA Doug Muller, and Dr. Thomas Wilson —  both of Ryan’s parents are alumni.

“In spite of visiting dozens of colleges from coast to coast, I knew Stony Brook was where I wanted to be,” he said. “I’ve been to countless football, basketball and lacrosse games here, participated in Stony Brook’s Robert W. Greene Summer Institute for High School Journalists in the summer of 2017, where I made close connections with faculty and staff and was thrilled to learn that Stony Brook had the only SUNY School of Journalism, which is one of my areas of interest. And I have to admit, the SUNY price tag is an added bonus.”

Ryan has some priceless advice for his fellow students as they encounter their own obstacles. “Life throws curves whenever and wherever for no explicable reason. There is no preparing. You must be strong and trust that things will get better. I am a true believer that everything happens for a reason, even if you can’t tell what it is right away. I may not have discovered my diabetes as early as I did if it were not for the boating accident. My co-instructors from sailing have become like family. Our collective accident experience bonded us in ways that are hard to explain. And my best friend Jillian, who helped save my life, found strength she didn’t know she had. Look for the silver lining. It will be there!”