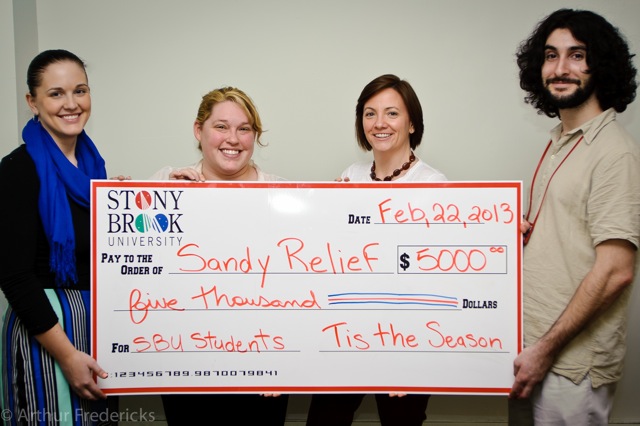 Stony Brook University Residence Halls raised $5,000 for Sandy Relief Efforts during a six-week fundraising campaign that took place from Monday, October 22, 2012 to Friday, November 30, 2012. The annual fundraising effort is known as Tis the Season. In total, $25,014.04 was raised for charity.

Since the fall of 1989, the Department of Residential Programs has been brightening the lives of families and children in neighboring communities through the Tis the Season charity fundraiser. The focus of Tis the Season is to get Stony Brook students involved in community service opportunities by connecting them with organizations outside of the University. Every year, Tis the Season collects money from students, primarily from the Residence Halls, to purchase gifts for children of underprivileged families.

Unfortunately, due to Superstorm Sandy in October 2012, many Stony Brook students and their families were adversely affected. Tis the Season was in full swing when the storm hit, and the campus made it clear that funds should be raised for those in need of repairing their homes and lives in an effort to return to “normalcy.” Beth McGuire, assistant director of College Housing, Roth Quad director, and chair of the committee responsible for planning Tis the Season stated, “It is important to us that this initiative come full circle and help those community members in need.”

This year, gift cards totaling $5,000 to Home Depot and Target were purchased for 28 Stony Brook students, who were identified by professional staff members in the Dean of Students Office as being in need of assistance due to the devastation caused by Superstorm Sandy. Thus far, five students have received their gift cards. “We never expected to have to use the money for our own community members, but we’re proud that we can provide assistance for them,” said McGuire.