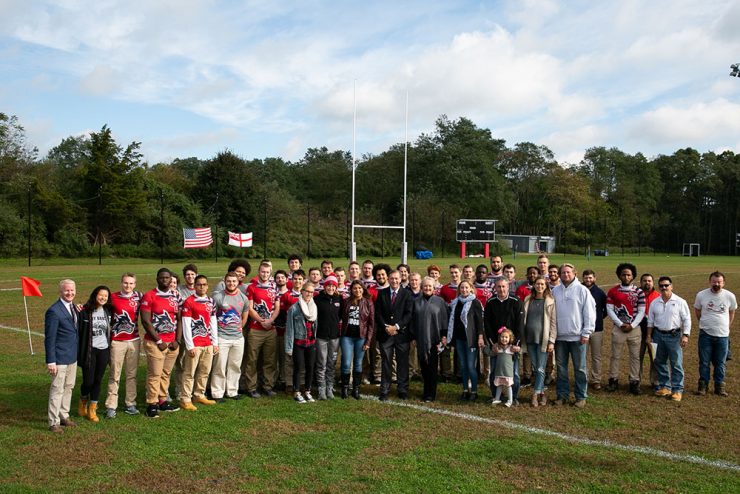 For nearly 25 years, Peter Baigent devoted himself to improving access to higher education and bettering Stony Brook University in as many ways as he could.

Baigent wore many hats during his time as a Stony Brook administrator, including Vice President for Student Affairs and President of the Faculty Student Association. Colleagues admired his wisdom, commitment to diversity and his willingness for encouraging and supporting those around him.

Baigent died last fall of complications from an autoimmune disease. On October 20, the University honored his memory by renaming Campus Recreation Field B. From now on, everyone that visits Peter M. Baigent Memorial Field will know him for one of his other great passions: rugby.

During the dedication ceremony, Interim Vice President and Dean of Students Richard Gatteau told the crowd Dr. Baigent is credited with helping to make the English game of rugby a recognized league sport in the United States more than 40 years ago.

“When Peter came to the United States in 1972 for a doctoral program in education at Syracuse University, he founded a rugby team and represented the Eastern regional rugby union.  In 1975, four regional unions met in Chicago to create the USA Rugby Football Union, which later became USA Rugby. In 2013, Peter traveled to Houston, Texas to be honored as a co-founder of USA Rugby, the sport’s official nationally governing body.”

University President Samuel L. Stanley Jr. recalled Baigent’s love for the University and ability to lead by example during his remarks.

“Peter’s real legacy — one that I think about every day — was his commitment to creating a culture which honors and respects the needs of our students,” President Stanley said. “His unyielding commitment to serving and supporting all students, helping to empower them to pursue and reach their career goals and personal aspirations, has become part of Stony Brook’s DNA – just as it should.”

In addition to the field that now bears his name, the Faculty Student Association will honor Baigent’s memory through the establishment of the Dr. Peter M. Baigent Memorial Endowed Scholarship to assist students in need. To donate, visit www.stonybrook.edu/baigentscholarship.