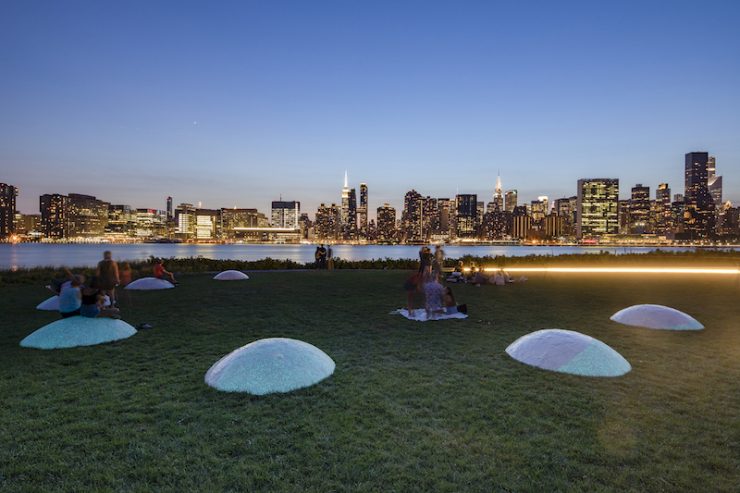 Outdoor activities are the best choice during the COVID-19 pandemic, so now is the perfect time to discover New York City’s many outdoor art displays, including one from a Stony Brook art professor. Nobuho Nagasawa’s artwork in Long Island City, “Luminescence,” has been featured in print and online in The New Yorker July 20 Goings On About Town section. On October 28, the project received “Special Recognition” at New York City’s 38th Annual Awards for Excellence in Design and also won the 2020 National American Society of Landscape Architects (ASLA) Honor Award for Design.

In 2018, a lunar landscape arrived in Long Island City: Nobuho Nagasawa’s ‘Luminesce,’ in which seven concrete domes represent the phases of the moon and double as seating on the peninsula lawn of Hunter’s Point South Park, offering a stunning view of Manhattan from across the East River.” — The New Yorker

In 2019 “Luminescence” and the Hunters Point South Waterfront Park project received the Best Urban Landscape Masterworks Award and “Luminescence” was recognized in the publication “Women Design NYC,” published by the Mayor’s Office. In 2018 the piece was selected as The Best Public Art in NYC, and in 2016 Nagasawa received the Excellence in Design Award by the City of New York.

“Luminescence” is a symbolic tribute of the lunar influence on the tidal rhythms of the East River. Using NASA topographic survey data collected by the Lunar Reconnaissance Orbiter, the surface of each moon depicts a stylized but accurate representation of the moon’s surface of craters, mountains and valleys. At night, each phase is illuminated by a phosphorescent polymer integrated into the moon’s surface. The placement of the moons creates a natural vista where people may observe the water, the sun, the moon and the sense of time passing against the Manhattan skyline.