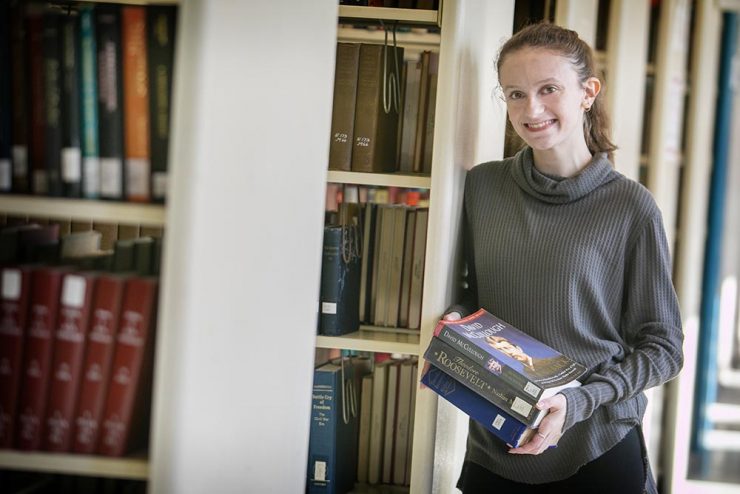 A little-known assassination attempt on Theodore Roosevelt is the topic of hands-on historical research being carried out by Nava Berger ’20 under the guidance of award-winning history professor Nancy Tomes.

For Berger it’s the culmination of a longtime interest in Roosevelt’s life and times. Since age 16, she volunteered at Sagamore Hill National Historic site, immersed in the physical surroundings and living history of the 26th President’s “Summer White House.”

“For me, the topic was so clear because of all the time I have spent at Sagamore Hill, Berger said. “Writing a senior thesis is a lot of work. But I love the topic of my research, so truly I enjoy working on it.”

Berger’s thesis weighs the credibility of various accounts of a 1903 incident in which a man named Henry Weilbrenner, who wished to marry Roosevelt’s daughter, was arrested at Sgamore Hill with a loaded gun.

“It’s hard to know what was truth and what was made up in an attempt to sell newspapers,” Berger said. “The incident happened during the time of sensational journalism, when the goal of many papers was profit and not factual reporting.”

In her quest to find the truth, she uncovered original documents that shed light on the case.

This past January, Berger was awarded a URECA (Undergraduate Research & Creative Activities) travel grant to fund her research at the Library of Congress in Washington DC, where she had the opportunity to explore the Alice Roosevelt Longworth Collection and examine the diaries and letters of Alice Roosevelt. With Tomes’s support, she hopes to publish her findings in a historical journal.

At Stony Brook, Berger has been active as a Roth Regatta Committee member, a Hall Council Senator, and an intern in the Vote Everywhere Program. She also has interned in summers and winter breaks for the Suffolk County Legislature page program and the Office of Suffolk County Legislator Susan A. Berland of the 16th District. Berger will be attending law school following graduation. She is a graduate of Schechter HS of Long Island in Williston Park.