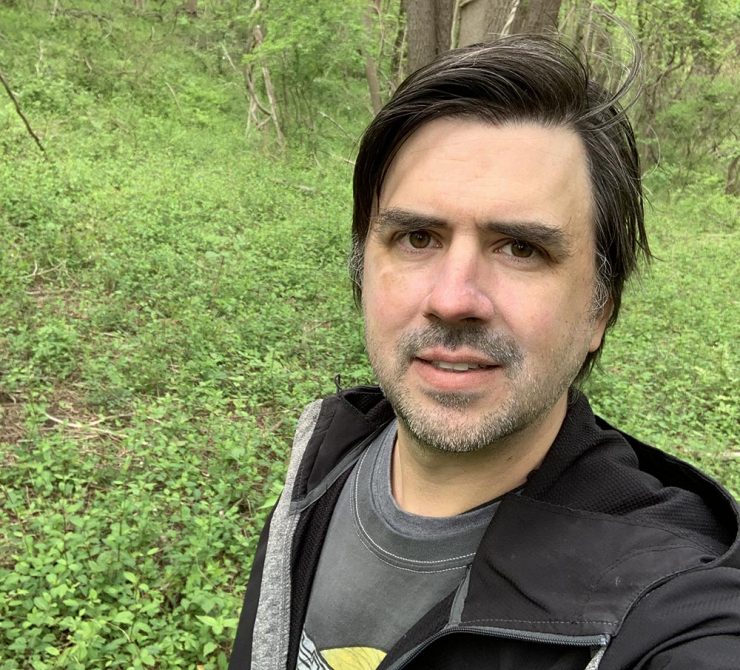 In 2017, when Jay Loomis was working on his MA in the Department of Music, he won a $1,000 scholarship from the Friends of the Ashley Schiff Forest Preserve.

Its members knew of his reputation for composition on the flute and thought he would be the perfect candidate to make music in the natural environment echoing the beauty of the woodland site on campus.

The scholarship recognizes Stony Brook University undergraduate and graduate students of outstanding academic ability who demonstrate a commitment to environmental preservation through academic studies or research projects using the Ashley Schiff Preserve, a 26-acre on-campus reserve locally renowned for natural beauty. “Most of the projects are STEM-research related, so I think they were also interested in engaging people from the humanities for their scholarship,” said Loomis.

More than 15 years ago, before studying music at Stony Brook, Loomis taught himself to play a variety of wind instruments from different world cultures. He began to develop his skills on the Irish flute, the Native American flute, the tin whistle and the harmonica.

“While studying at Stony Brook, the Ashley Schiff Preserve was always a place of solace and renewal for me — I often put down my books, closed my laptop and headed across campus to plunge into the otherworld of the woods in the preserve, just to get away for a while, to find new energy to dive back into my research,” recalled Loomis, who in 2019 began his PhD studies in music at Brown University.

Any natural setting was Loomis’ favorite place to explore melodies and experiment with the sounds of the flutes in his collection. In fact, he recorded many hours of original music outdoors using digital recorders during hikes in forests, walks on beaches, and treks in the mountains of Spain and New York.

“I continue to develop my sound by listening to the birds and to the wind in the trees, or by quietly playing along with the water of a flowing stream,” he said. “When I want to compose and record music in a park like the Ashley Schiff Forest Preserve, I put a number of flutes in my backpack along with my portable audio and video recording equipment.”

He would compose and record original music all along Long Island’s North Shore, including West Meadow Beach and Avalon Park in Stony Brook, Caumsett State Historic Park Preserve in Huntington, and Sagamore Hill in Oyster Bay.

While walking around the Ashley Schiff Preserve, between 2017 and 2019, he took time to stop and record original music in all of the different seasons, playing a variety of wind instruments. Loomis used his grant money to record hours of audio and video in the preserve, and then spent months condensing and combining his footage to produce a three-part musical film titled: Ashley Schiff Preserve Seasons and Soundscapes.

“When I create music, inspired by a cool breeze and the sounds of birds in conversation in the trees, under the sun shining through a canopy of leaves, I am refreshed,” Loomis said.

During the past few months, Loomis has been using Facebook Live to record and upload sessions of his music made in a number of parks on Long Island.

Loomis’ wish is twofold: “I hope that people will enjoy the music I composed — my melodies interwoven with the sounds of nature — and, from listening to my music, my other wish is that people will be motivated to explore the Ashley Schiff Forest Preserve, because it’s an extraordinary natural resource right on the Stony Brook University campus.”