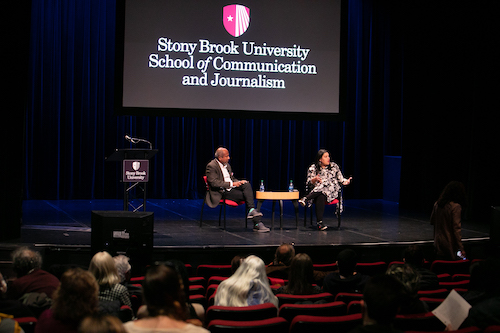 Mitra Kalita had one of the most influential jobs in journalism. As the senior vice president of CNN Digital, she oversaw the national news, breaking news, opinion and features teams. But when her hometown, Jackson Heights, became one of the first U.S. epicenters of the pandemic, she re-evaluated her career and the role that journalism should play in society.

At the School of Communication and Journalism’s (SoCJ) annual Marshall R. Loeb Lecture on Innovations in Digital Media, Kalita told her story to an auditorium full of students, faculty, staff and community members.

“If I can’t figure out [how to help] my neighborhood right now, what good am I as a neighbor let alone as a journalist? And so we launched Epicenter,” Kalita said at the February event.

“He would have appreciated the work the college is doing, the university is doing, and would appreciate that today more than ever, journalism is incredibly important and has certainly changed,” Loeb said.

Kalita’s newsletter, a prime example of how journalism is important and changing, became a vital resource in her community, helping people find vaccines and other critical resources. Since it launched, the newsletter has helped to vaccinate more than 10,000 people and continues to be a resource for the community.

“She realized that if you really want to serve your readers – as we say in journalism – maybe helping keep them alive is the highest form of service of all,” said Sree Sreenivasan, the inaugural Marshall R. Loeb visiting professor in digital innovation.

The SoCJ’s Loeb Lecture was established as a forum to discuss digital media innovations, and to honor Marshall R. Loeb, whom the New York Times considered “one of the most visible and influential editors in the magazine industry.” The lecture is part of a partnership between the School, Michael Loeb, and loeb.nyc, a venture collective founded and led by Michael Loeb. Kalita left CNN to focus on the newsletter, and then co-founded URL Media, a network of Black and Brown-owned media organizations that share content, distribution and revenue to increase their long-term sustainability.

“I’d like to thank Michael Loeb and loeb.nyc for this incredible partnership and for empowering the Stony Brook School of Communication and Journalism to enhance its capacity for new forms of entrepreneurial journalism and media,” President McInnis said. This is a partnership we cherish and we are eager to see it grow and expand. … The work of the School of Communication and Journalism will be essential as we build an innovative and inclusive new chapter in communication, journalism and digital media.”