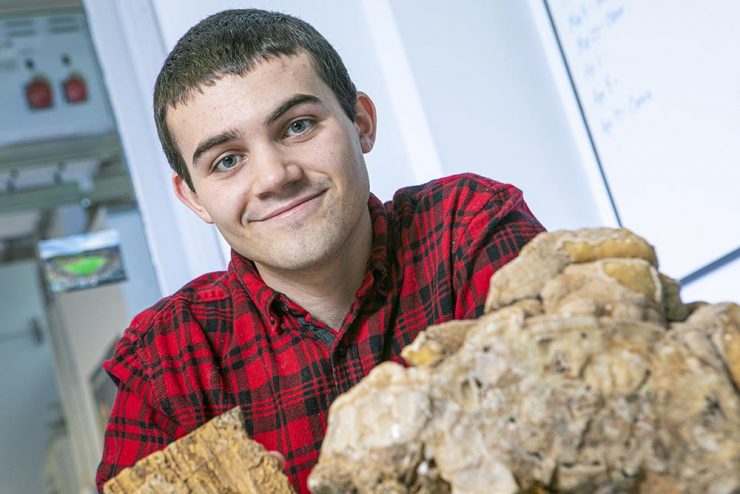 Hatton has been doing undergraduate research under the mentorship of Professor Troy Rasbury in the Facility for Isotope Research and Student Training (FIRST) Lab for more than two years. Last summer, he  was awarded URECA funding to support his work on “U-Pb dating of Petrified Wood in the Turkana Basin,” a project involving the screening and characterization of samples of carbonates and petrified wood collected in fall 2018 from Miocene strata in the Turkana Basin, Kenya.

Hatton was introduced to research at Stony Brook while he was still a community college student through the NSF-funded GEOPATH-IMPACT Summer Research program , led by Professor Brian Colle, SoMAS. Under the mentorship of Professor Weisen Shen, he gained exposure to geophysical research, and developed skills in Python programming.

He was also introduced to mass spectrometry work in Rasbury’s FIRST laboratory, and after transferring to SB, became involved in various projects, including a collaborative project with William Holt’s group involving dating volcanic ashes from the Southwest United States. At Stony Brook, Hatton has also participated in the S-STEM Assets program for transfer students, a program administered through the Dept. of Technology & Society and the Career Center. Kevin has volunteered to represent the Geosciences department at several events, including CommUniversity Day, and organized a geology trip to Central park for students.

“I’m happy to have found something that I know I really love, Hatton said. “I have not stopped being excited about the work that I do and the opportunities that come up.”