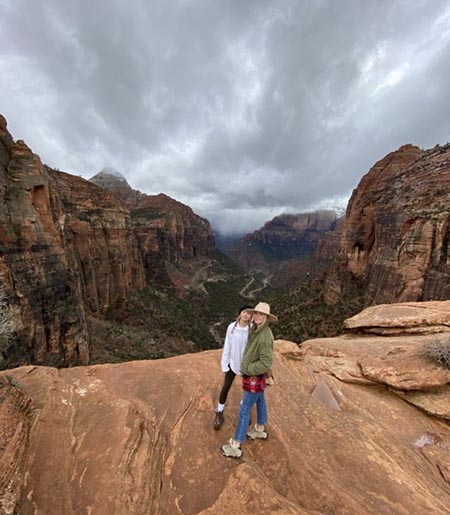 Dan Wirkkala is the CEO of a trucking company in Arlington, Washington. He can’t work from home, despite nearly 6,000 cases of COVID-19 and a statewide order to shelter in place. Worried about contracting and spreading the virus to his family, Dan insisted his wife and three children leave home.

Five days after his daughter Spencer, a sophomore journalism major, came home to finish her Stony Brook University classes online, the family left Washington for their vacation home in Arizona without Dan. They packed clothes, food and their golden retriever into their minivan and trekked through four states, each with a different response to the growing pandemic. With a laptop balanced on her knees, Wirkkala did what any future journalist would do — she turned a crisis-driven road trip into a story.

She was one of more than 20 SBU students reporting on the pandemic from around the country for The Osprey, a weekly news site produced by a School of Journalism class.

“We’re going to have to do this in real life, so if we can do it now, we’ll be able to do it later,” said James Bowen, a senior journalism major from Ossining, whose story highlighted the plight of undocumented immigrants who have lost their jobs in Westchester County. “I had the idea that the story was my priority. I will do whatever it takes to get the perfect story and I’m glad that I was able to. There’s a lot of pride in it.”

Bowen spoke to undocumented immigrants as they waited in employment lines and to Hispanic and Latino non-profit organizations in the area. All of his interviews were conducted in Spanish.

Other student journalists reported on the impact of cancelled Alcoholics Anonymous meetings, increasing pet adoption rates to combat social isolation and a Facebook group dedicated to making masks for healthcare workers and others. Another group of reporters focused on Long Island’s religious life, documenting Jewish communities in Five Towns and Port Washington and Christian communities in Port Jefferson.

“Today’s circumstances are unusual. Any kind of reporting is risky and challenging. And the situation is even more extreme for brand new journalists, who are testing their mettle and skill in the midst of a pandemic of catastrophic dimensions,” said Pablo Cavli, associate professor of journalism. “This group of brave and talented people has pulled off one of the most amazing issues of The Osprey so far, and they have done it under extreme conditions.”

The Osprey is the product of Cavli’s Journalism 320: Multimedia Newsroom II. Students pitch, report and write their own stories, review and edit their classmates’, and post the best of the bunch to a WordPress site. The pace is as aggressive as professional media outlets, and the course is one of the most challenging in the journalism major, according to Wirkkala.

“Reporting on this road trip was pretty frantic. I’d actually pitched a different story than the one I ended up writing, but under the circumstances, I couldn’t report from the road on anything other than our trip,” said Wirkkala, who is minoring in women’s studies.

Like most universities, Stony Brook moved all classes online in March, and students were asked to leave campus to reduce the risk of spreading the highly contagious novel coronavirus, which causes COVID-19. Away from campus, students will continue reporting using their smartphones, tablets and, in some cases, equipment that they have borrowed from the School of Journalism, rather than the state-of-the-art equipment normally available on campus.

Through their work, the students are revealing some of the untold stories and human impacts of a disease that has shaken the world.

“There are unspoken, undocumented issues like undocumented workers not being able to find work. People with degrees, they’ll always get jobs. What about the undocumented?” Bowen said. “Maybe because of my story, in future, people can think about the situation undocumented immigrants are facing. I hope that I’ve been able to open their eyes.”

The next issue of The Osprey will be up and running on Wednesday, April 8, and its final issue this semester, with long features, will be out on May 4.