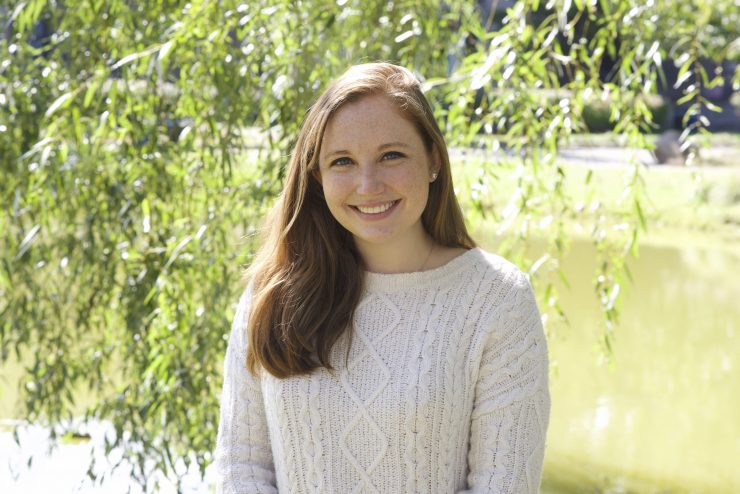 Brianne Ledda, a senior journalism student, has been recognized by the prestigious Hearst Journalism Awards Program.

Ledda, who is also editor-in-chief of the Stony Brook Statesman, placed in the top 20 in the national competition for feature writing for her piece about the legacy of slavery on Long Island. A version of the piece, which was produced for a class last year, also appeared in Newsday and on WSHU, a Long Island NPR affiliate station.

“It’s pretty exciting. It’s nice to think that all that work was received well. A lot of reporting and a lot of thought went into that story,” said Ledda. “It’s nice to have placed in this competition because this is something positive after a lot of negative things in 2020.”

Ledda’s story was among a series of pieces inspired by the New York Times’ “1619 Project,” about the 400-year legacy of slavery in the United States.

“History is very particular. You have to think about every single word because every word matters,” said Ledda. “We had so many stories that we had to tell and we had to prioritize. One question that we had to answer was that this is history. How do we bring this into the modern day? There was so much to cover. We just couldn’t fit everything we wanted in there. There were so many nuances and events that we couldn’t include.

“There’s this huge piece of history that’s been forgotten.”

The students’ work about the legacy of slavery was supported by a grant from the MJS Foundation that expands experiential learning in the School of Journalism. Previously, the grant supported reporting about the Long Island Pine Barrens. Currently, students are working on a year-long project focused on documenting the impact of the COVID-19 pandemic on the region, with a special focus on Stony Brook University and Hospital.

The Hearst Journalism Awards were founded in 1960 and distribute $700,000 in prize money to winning student-journalists in competitions held throughout the year. In addition to the feature writing category, prizes are awarded for multimedia reporting, photojournalism, broadcast and other writing categories. Students from journalism programs that are accredited by the Accrediting Council on Education in Journalism and Mass Communications are eligible for entry.

Ledda was the only Stony Brook student whose work was recognized this fall. Last spring, three students were recognized across several categories. Each semester journalism instructor George Giokas encourages students to submit their work for the competition.

Stony Brook students compete for recognition against students from other leading journalism programs in the country, including Syracuse University, University of Florida, Penn State, University of North Carolina at Chapel Hill and many others.