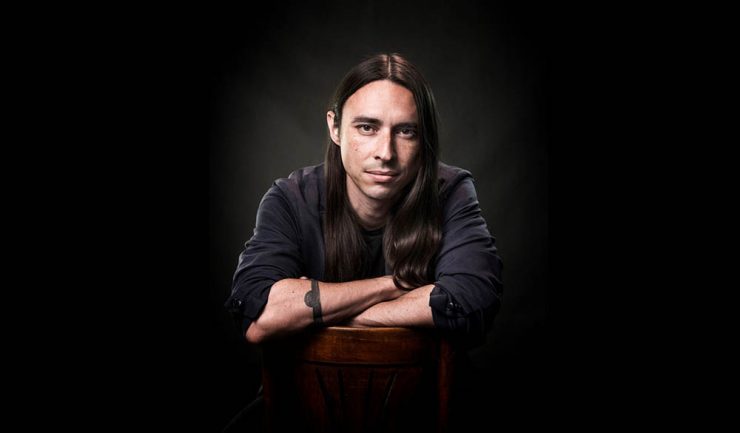 For Joseph M. Pierce, Associate Professor in the Department of Hispanic Languages and Literature, the question of who gets a voice in the creation of knowledge matters. A citizen of the Cherokee Nation, Pierce is keenly aware of how knowledge generation and transmission can serve violently oppressive ideological ends. In his work and thought, Pierce interrogates the methods employed in gathering and distributing knowledge at all levels of the process. In particular, he turns a critical eye to the structure of the family, questioning how norms are both embodied and subverted at the site of intimate relations.

Pierce’s new book, Argentine Intimacies: Queer Kinship in an Age of Splendor, 1890−1910, released in November 2019, draws on the fields of queer studies, Latin American studies, and literary and cultural studies as he engages with an archive of materials that once belonged to the Bunges, one of Argentina’s foremost intellectual and elite families at the turn of the 20th century. Pierce also recently appeared on Hyperallergic’s Art Movements podcast, where he discussed the relationship between decoloniality and queerness, as well the importance of evolving queer studies into a more open space of inquiry in which local knowledges and communities can flourish.

Pierce has a nuanced take on the state of contemporary academic theory. On the Art Movements podcast, Pierce suggested that academics learn to engage with communities in terms set by those communities. Such an approach would mean rethinking the traditional notion of the academic, the scholar, in order to arrive at a more intimate mode of knowing.

“The university was meant to develop and protect the racial, gendered, and class taxonomies that form the basis of western modernity,” Pierce explained. “But the university is, at the same time, a space for intellectual exploration in which many marginalized people and communities have found refuge.”

Pierce offered an example to demonstrate how universities in the past have served as safe spaces for marginalized groups and individuals: “Last October in Ecuador, amidst massive popular protests over neoliberal economic policies that were led by Indigenous communities, it was the public universities that opened their doors to provide shelter. This is a literal example, but it demonstrates how universities can also be responsive to community interests, rather than those of the economic and cultural elite.”

Community interests are a central concern for Pierce. His aim is to transform the institution of the university into “something else, something responsive to community, built through community, rather than in order to justify the exploitation of humans and other-than-human-kin.” Pierce’s vision for universities is motivated by his commitments to feminist, anti-racist, and anti-capitalist thought and to the effort of dismantling the structures of oppression against which such thought is set.

Pierce recognizes that his admittedly utopian project is one that can find fulfilment only in a distant and much-worked-for future. However, no meaningful and long lasting structural changes are ever achieved without the reorientation of practices in the present. Pierce shared how he incorporates his vision for the university into his pedagogical practice. “One thing I try to do in my own work, at least in my teaching, is imagine the classroom as a space of knowledge exchange, rather than myself as the source of knowledge,” he said. “This comes from my commitment to community as a teacher and as an Indigenous scholar. When we value the experiences and the knowledge that students bring to the classroom, that means decentering the place of ‘the scholar’ in favor of dynamic communities of mutual respect and engagement.”

For academics, the longstanding modes of engaging with the world outside the university have been teaching and scholarship. Pierce’s effort to craft a more inclusive and open space for engagement has brought him outside the classroom and beyond the university grounds. “Part of my commitment to community involves creating spaces of engagement with ideas and with people that can lead to transformative social change,” he said. “Today, this means finding ways to approximate solidarity, while at the same time proposing conceptual frameworks that can attend to historical differences.”

College of Arts and Sciences LGBTQ*