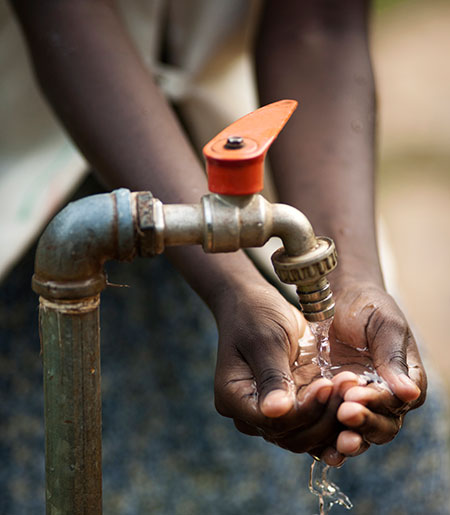 The world’s population is projected to increase by 2-3 billion over the next 40 years. Already, more than three quarters of a billion people lack access to clean drinking water and 85 percent live in the driest areas of the planet. Those statistics are inspiring chemist Ben Hsiao and his team at Stony Brook University. With support from the National Science Foundation (NSF), the team is hard at work designing nanometer-scale water filters that could soon make clean drinking water available and affordable for even the poorest of the poor.

In a “Science Nation” video released by the National Science Foundation, Hsiao explains that traditional water filters are made of polymer membranes with tiny pores to filter out bacteria and viruses. Hsiao’s filters are made of fibers that are all tangled up, and the pores are the natural gaps between the strands. The team’s first success at making the new nanofilters uses a technique called electrospinning to produce nanofibers under an electrical field.

Hsiao’s team is also looking to cut costs even further by using “biomass” nanofibers extracted from trees, grasses, shrubs — even old paper. Hsiao says it will be a few years yet before the environmentally friendly biomass filters are ready for widespread use in developing countries, but the filters will eliminate the need to build polymer plants in developing areas. Ultimately, those filters could be produced locally with native biomass or biowaste.

“Science Nation” is a video series commissioned by the NSF Office of Legislative and Public Affairs. The series is distributed throughout the world, including to LiveScience.com and other media outlets on the Internet, local community TV stations in the U.S. via TelVue Connect Media Exchange, Voice of America for international broadcast distribution, the NSF STEM video portalScience360, the Knowledge Network video stream and Roku channel, and K-12 content distributors in the U.S. and abroad.  Some episodes also appear in the nationally-distributed PBS documentary series This American Land.