For SoMAS’s Oliver Shipley, Every Week is Shark Week 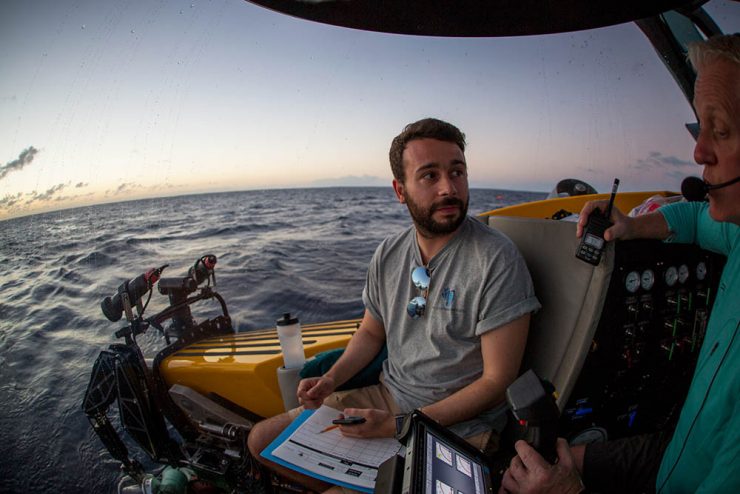 Oliver Shipley might have one of the best assignments in the world — he gets to scrutinize what is arguably Earth’s most fascinating and feared creature in its natural habitat, from the safety of an underwater research submersible.

Having studied sharks and other ocean creatures as an undergraduate, masters and now PhD student at the School of Marine and Atmospheric Sciences (SoMAS), Stony Brook researcher Shipley was thrilled to get the opportunity this past spring to become a first-time traveler to the deep ocean, the most unexplored ecosystem on the planet.

Shipley’s mission, which included another scientist and a submersible pilot, was to survey the seafloor, noting all of the animals in view and to study the community structure. That meant searching for small sharks and other aquatic specimens to bring back to the lab.

As the sun set in the Bahamas, Shipley’s crew began its one-hour descent to 600 meters to scour the ocean floor with the help of light traps attached to an anchor line on a fish aggregation device at various depths.

“You felt like you were in a space ship,” said Shipley. “It was pitch black other than the sub lights. It was like landing on an alien planet.” “The submersible was extremely comfortable. I didn’t find it difficult to adjust to the conditions. The sub pilots make you feel incredibly safe. It was the fastest five hours of my life. I didn’t want to come back up,” he said.

Shipley’s connection to the shark-rich Bahamas began in 2012 when he was an undergraduate student working at the Cape Eleuthera Institute (CEI) under the tutelage of Edd Brooks. In 2015 he met College of Arts and Sciences Assistant Professor Greg Henkes, Department of Geosciences, (now a member of his PhD committee) when he was working there as a research assistant pursuing his masters. Having multiple close friends who had completed the Stony Brook PhD program, Shipley found his way to The Henkes Lab and his eventual PhD advisor Michael Frisk, whose research interests aligned with his own.

With a collaborative expedition between the Cape Eleuthera Institute and OceanX, which approached Henkes’ lab to help collect faunal samples and provide scientific input, a scientific team that included Shipley was recruited. The expedition was to be undertaken on OceanX’s scientific research vessel M/V Alucia.

OceanX, whose mission is to unite science, media and technology “to explore the ocean and bring it back to the world,” has played major roles in nature documentaries such as BBC’s Blue Planet II and will co-produce the upcoming National Geographic series Mission OceanX.

“Ollie’s representation of Stony Brook on this cruise is notable and no doubt a once-in-a-lifetime opportunity for him,” said Henkes. “He has a real entrepreneurial spirit and we’re fortunate to have him out there representing the lab and the University in such a high-profile exploration.”

“Previous work we conducted there led to the description of new species and it is likely there will be a lot more where that came from,” said Shipley.

On earlier excursions in the Bahamas across multiple islands including Great Exuma, Nassau, New Providence and Eleuthera, Shipley’s work has typically focused on the Caribbean reef shark, a species that brings millions of dollars annually into the Bahamian economy through ecotourism, including scuba diving and snorkeling. Shipley works with multiple groups including the Cape Eleuthera Institute and Beneath The Waves.

“My main interests are in examining how sharks connect food-webs and the implications that shark removal may have as a result,” said Shipley. “Sharks move through many ecosystems and as a result, connect them in space and time. The ecosystem connectivity is thought to be extremely important for ecosystem resilience, such as the ability of a system to rebound following a hurricane. Through chemical tracer analyses we are able to quantify the degree to which sharks rely on these different ecosystems for food and thus, which ecosystems they are connecting.”

“The Bahamas is a great place to conduct research on sharks, because it provides an almost pristine environment to study sharks removed from stressors such as commercial fishing, pollution and coastal development,” said Shipley. “And we can use the Bahamas as a platform to introduce sanctuaries into other regions that need them.”

Shipley is on the go, much like the sharks he studies. He makes three or four trips to the Bahamas annually to teach students and undertake various shark research projects and also has a busy field season in New York during the summer and fall asking similar scientific questions including but not limited to: blue sharks, common thresher sharks, sandbar sharks, sand tiger sharks and shortfin mako sharks.

“New York’s waters support some of the most vulnerable shark species,” he said.

“You only have to look to social media programs to see the large volume of people who advocate for our oceans in general,” Shipley said. “I feel like this movement is beginning to turn the tide on sharks. The negative stigma projected onto sharks by movies such as Jaws is slowly being lifted. One of the key aspects of this movement is educating young students, who will eventually carry the torch. It is really refreshing to see but we still have a lot of work to do.”