For Mallory Rothstein ’15, Leadership Is a Way of Life 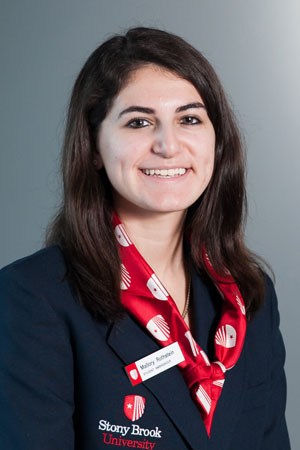 One thing that can be said about Mallory Rothstein ’15 of her time at Stony Brook University — she has not been cheated.

From the moment she stepped on campus to the day she turned the tassel on her mortarboard, this University Scholar has crammed more into her four years here than seems humanly possible.

The psychology major/business minor has immersed herself in such Stony Brook programs and organizations as Miracle Corners of the World and DoSomething.Org, as well as Study Abroad and the cancer awareness initiative “Boobs and Bras.”

In addition, she became an advocate for the LGBTQ community, member of ElectHer, Leadstrong, and Alternative Spring Break Outreach (ASBO); a coordinator at the Walter J. Hawrys Campus Recreation Center; a teaching assistant for College of Business Dean Manuel London; chair of the senate as executive vice president for the Undergraduate Student Government; co-organizer of the Roth Regatta; and a Student Ambassador.

As a junior, Mallory found her favorite moment in research, presenting her findings at the 10th Annual NYU Stern Conference on Social Entrepreneurship with professor London and alumnus Steve Dell’Amore ’13. She was the youngest person attending and  exhibited in front of internationally renowned researchers. London saw so much promise in Mallory that he allowed her the freedom to revamp the syllabus of Social Entrepreneurship (LDS 102).

Mallory is quick to thank her grandparents for instilling that high-octane drive in her when she was a young girl growing up in Freehold, NJ. “One of my grandmothers got me a library card when I was very young and stressed the importance of reading, and I would take out books on nearly every topic and genre. At nine, I was reading about ancient civilizations one week, how bees make honey the next, and the week after that, a mystery novel,” she said.

When she arrived at Stony Brook, Mallory found no shortage of ways to satisfy her hunger to learn. And while she was still a freshman, Mallory received the Student Life Emerging Leadership Award.

“That touched me very deeply,” she said, “I wasn’t expecting it because I thought a sophomore with more experience would win it. Winning that award really propelled me to take on more and bigger leadership roles because I knew that other people believed in my potential.”

Miracle Corners of the World was another Stony Brook highlight for Mallory, who was exposed to the New York City-based organization while in the Social Entrepreneurship course. Its vision of “local change through global exchange” and mission to “empower youth to become positive agents of change in their communities” resonated with Mallory, who won the Mentee Award while serving at its Youth Leadership Retreat.

Boobs and Bras, another initiative near and dear to Mallory’s heart, became a new annual Stony Brook event focused on raising awareness about breast health and empowering people to be confident about their bodies. It began two years ago when her friend Jennifer Islam, ’16 asked her to help co-organize the event. Just 60 people were in attendance last year but by 2015 it drew an overcapacity crowd of roughly 200.

By participating in ElectHer, the National Conference for Women Student Leaders and Leadstrong, Mallory has learned to work alongside men and educate them about women’s issues.

Taking part in Stony Brook’s Study Abroad program in Florence, Italy, and her side excursions throughout Europe gave Mallory an awareness of what many Americans routinely take for granted.

“I appreciate the little things, such as free water at restaurants, campus meal plans and dryers,” she said. “And I truly learned the importance of being able to communicate in non-verbal ways and to be patient with those who don’t know the same language as I do.”

The “million dollar question,” as Mallory puts it, is where she is heading once she gets that sheepskin.

“That’s the million dollar question! I don’t know exactly where my life is headed directly after graduation but I can tell you that one day you’ll see me in the news founding my own not-for-profit or social enterprise, being the CEO of an organization, being a public speaker, writing a book, teaching at least one college class, and overall just making a positive difference in the world. This Seawolf is going to make Stony Brook University very proud!”