Exploring the Computing Power of “Wetware” 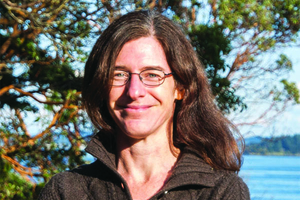 What is “wetware” and what makes it more powerful than even the most advanced artificial intelligence? Adrienne Fairhall, Professor of Physiology and Biophysics at the University of Washington, will reveal the secrets of wetware in her talk “The Computing Power of Wetware” at the 22nd Annual Swartz Foundation Mind Brain Lecture on Monday, April 2, in the Staller Center for the Arts.

Our world is increasingly influenced by machine intelligence, as artificial neural networks become part of our daily lives. Powerful as they are, our brains and the nervous systems of even simple organisms, or “wetware,” perform at levels that are — for now — beyond the reach of these networks, in terms of rapid learning, the ability to adapt, etc. What is it about “wetware” that endows it with its special properties? Evolution has equipped nervous systems with an exquisite array of complex interacting parts. Professor Fairhall will discuss some of the physics and biology that may underlie the remarkable performance of living computers.

Fairhall earned an honors degree in theoretical physics from Australian Natiional University and completed her PhD in physics at the Weismann Institute of Science. She moved into neuroscience research as a postdoc and continued on that track when she joined the University of Washington’s Department of Physiology and Biophysics in 2004. She focuses on creating mathematical and statistical methods to study the relationship between neuronal circuitry and functional algorithms of computation. Fairhall also directs computational neuroscience programs at the University of Washington and is co-director of its Institute for Neuroengineering and its Center for Computational Neuroscience/Swartz Center for Theoretical Neuroscience.

This special event, hosted by the Department of Neurobiology and Behavior and sponsored by the Swartz Foundation, is intended for a general audience. Admission is free but seating is limited so please arrive early. A reception with the speaker will follow the lecture.