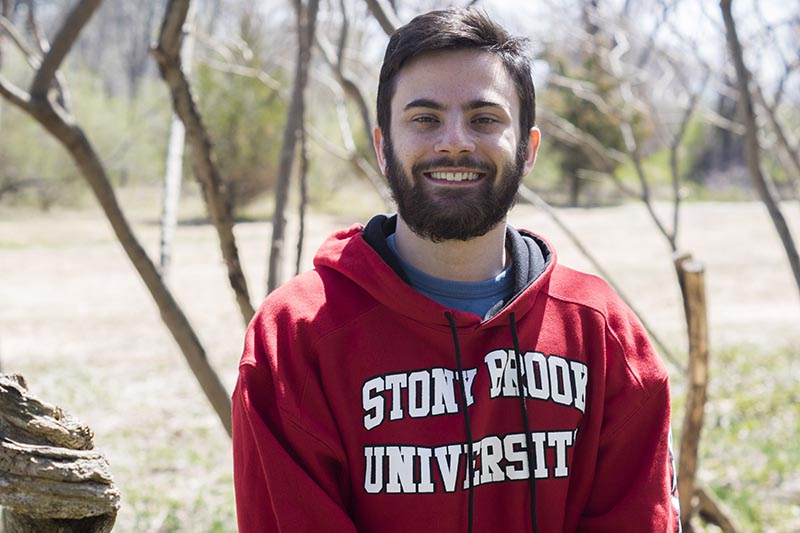 Empowered by his position as a sustainability intern for the Faculty Student Association (FSA), Edward Gallagher ’18 has worked to develop a more efficient, sustainable method to compost food waste at campus dining locations.

While FSA currently composts “pre-consumer” food leftovers that no one has bought or taken, resulting in more than 6,000 lbs. of food waste converted into usable compost this semester, a program to compost leftovers that students couldn’t finish was in need of development — and Gallagher was happy to help.

In his research, Gallagher came across a composting process called Bokashi, a Japanese term for “fermented organic matter.” In Bokashi composting, kitchen scraps of all kinds are mixed with inoculated bran, pressed into a bucket, covered with another handful of bran, and tightly covered. When the bucket is full, it is sealed shut and set aside for 10 to 12 days.

“You’re using a sealed container so you’re not letting air in and you end up not producing any carbon dioxide, gallaghercomposting food waste without making carbon dioxide. Then you can use it as fertilizer,” Gallagher explains.

As a FSA sustainability intern, Edward’s research on food waste has been supported and encouraged by the organization. “FSA has been instrumental in getting my foot in the door, providing funding for the project so I don’t have to pay for the materials, and they’ve given me a greenlight to sort of mold what I want to do to the system that we have in place,” Edward said.

Gallagher chose the Sustainability Studies major after sampling a variety of programs, such as computer engineering and applied math and sciences, but realized that his passion was for finding ways to help the environment.

He became concerned about environmental waste during a family trip to the Bahamas in 2011.  “When we got there, there was half the island, the inhabited part, where all the partying was and everyone was having a good time, and then there was the part that didn’t have any people, so there was this long stretch of beach just covered in trash,” Gallagher explained. “I was kinda like wow, that’s terrible, so me, my mom and my sister actually went over there and started picking up plastic off the beaches.”

Gallagher is hopeful for Stony Brook to be an example for other universities in processing food waste. “We can find ways to reduce our food waste that we ship out to Brookhaven, we can reduce our methane footprint, and hopefully act as a model for other schools to combat unsustainable practices that lead to climate change,” he said.