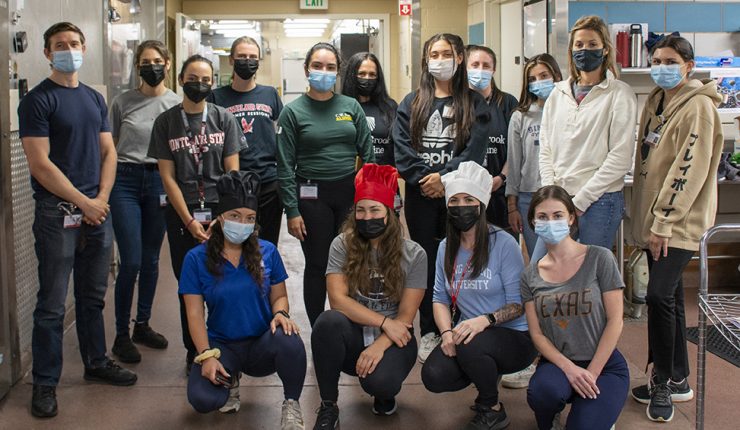 On June 8, dietetic interns from the Renaissance School of Medicine at Stony Brook University competed in their annual end-of-the-year cooking competition. Lorraine Danowski, associate director of the Dietetic Internship, modeled the competition after the popular Food Network TV series, Chopped, and partnered with the University Hospital foodservice staff to host the competition in its kitchen.

This year’s competition was dedicated to a dietetic intern who recently passed away, just weeks before completing her certification. The interns made T-shirts to remember Nathalia Aldovino, a loving mother of three children.

Executive Chef Jim Kellenberger coordinated the Chopped cooking competition with Danowski to get the students ready for this fast-paced kitchen competition. “I love the Chopped competition and working with the dietary interns to produce recipes and give them insight into the inner workings of our commercial kitchen. Just a few months ago, they were working on a simple recipe to feature for hospital patrons, and now they can prepare three-course meals as they prepare for the next step in their careers,” stated Kellenberger. Each team grabbed their aprons after being assigned either a plant-based protein or dessert as the mystery ingredient provided by Chef Kellenberger.

Kathleen Logsdon Carrozza, assistant director of Food and Retail Services, was one of the judges in the competition and explained, “This year was really interesting watching the interns prepare new vegetarian proteins. Some of the ingredients were items none of us had any experience cooking or eating. I’m so proud of the interns and their creativity in making these tasty dishes. In the end, we all learned something about the plant-based protein trend and discovered some really delicious recipes!”

The interns were given ten minutes to plan and an hour to prepare and plate their meal. Afterwards, judges critiqued the food on the basis of taste, creativity, presentation and utilization of ingredients. “It was fun competing with the other interns. My team was given chia seeds soaked in almond milk, so rather than going with the traditional oatmeal and chia seed recipe, we made chia seed cupcakes with chia seed frosting and it came out better than expected! They provide high protein and fiber, which puts a great spin on dessert,” explained Brianna Renda, dietetic intern.

All of the interns used their time wisely and created delicious meals to impress the judges with their culinary skills. Carolyn Kenney ‘22 from team “Broccoli Spears” made Baja fish tacos with her partner and commented, “Chopped was a really great way to get the dietetic interns together one last time for a friendly competition before graduating.”

Accolades were given to two teams this year who won in the protein category and one team for the dessert category.

The students graduated from the program on June 10 and created lasting memories. “I am very proud of all of the dietetic interns and the recipes they prepared with the mystery ingredients. This group is our 24th graduating dietetic internship class and the 10th class to participate in this competition,” stated Danowski.