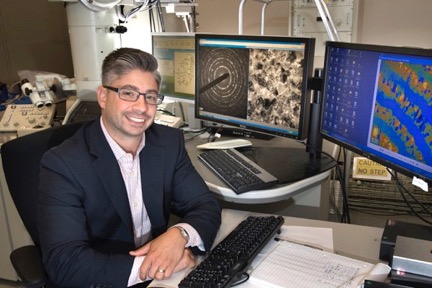 Materials science is a field that Jason Trelewicz has been interested in since he was a young child, when his father — an engineer — would bring him to work. In the materials lab at his father’s workplace, Trelewicz would use optical microscopes to zoom in on material surfaces, intrigued by all the distinct features he would see as light interacted with different samples.

Trelewicz is now an assistant professor in the College of Engineering and Applied Sciences’ Department of Materials Science and Chemical Engineering with a joint appointment in the Institute for Advanced Computational Science at Stony Brook University and principal investigator of the Engineered Metallic Nanostructures Laboratory. In these roles, he takes advantage of the much higher magnifications of electron microscopes to see tiny nanostructures in fine detail and learn what happens when they are exposed to heat, radiation and mechanical forces. In particular, Trelewicz is interested in nanostructured metal alloys (metals mixed with other elements) that incorporate nanometer-sized features into classical materials to enhance their performance. The information collected from electron microscopy studies helps him understand interactions between structural and chemical features at the nanoscale. This understanding can then be employed to tune the properties of materials for use in everything from aerospace and automotive components to consumer electronics and nuclear reactors.

Since 2012, when he arrived at Stony Brook University, Trelewicz has been using the electron microscopes and the high-performance computing (HPC) cluster at the Center for Functional Nanomaterials (CFN) — a U.S. Department of Energy (DOE) Office of Science User Facility at Brookhaven National Laboratory — to perform his research.

“At the time, I was looking for ways to apply my idea of stabilizing nanostructures in metals to an application-oriented problem,” said Trelewicz. “I’ve long been interested in nuclear energy technologies, initially reading about fusion in grade school. The idea of recreating the processes responsible for the energy we receive from the sun here on earth was captivating, and fueled my interest in nuclear energy throughout my entire academic career. Though we are still very far away from a fusion reactor that generates power, a large international team on a project under construction in France called ITER is working to demonstrate a prolonged fusion reaction at a large scale.”

Plasma-facing Materials for Fusion Reactors
Nuclear fusion — the reaction in which atomic nuclei collide — could provide a nearly unlimited supply of safe, clean energy, like that naturally produced by the sun through fusing hydrogen nuclei into helium atoms. Harnessing this carbon-free energy in reactors requires generating and sustaining a plasma, an ionized gas, at the very high temperatures at which fusion occurs (about six times hotter than the sun’s core) while confining it using magnetic fields. Of the many challenges facing fusion reactor demonstrations, one of particular interest to Trelewicz is creating viable materials to build a reactor.

“The formidable materials challenges for fusion are where I saw an opportunity for my research — developing materials that can survive inside the fusion reactor, where the plasma will generate high heat fluxes, high thermal stresses, and high particle and neutron fluxes,” said Trelewicz. “The operational conditions in this environment are among the harshest in which one could expect a material to function.”

A primary candidate for such “plasma-facing material” is tungsten, because of its high melting point — the highest one among metals in pure form — and low sputtering yield (number of atoms ejected by energetic ions from the plasma). However, tungsten’s stability against recrystallization, oxidation resistance, long-term radiation tolerance, and mechanical performance are problematic.

Trelewicz thinks that designing tungsten alloys with precisely tailored nanostructures could be a way to overcome these problems. In August, he received a $750,000 five-year award from the DOE’s Early Career Research Program to develop stable nanocrystalline tungsten alloys that can withstand the demanding environment of a fusion reactor. His research is combining simulations that model atomic interactions and experiments involving real-time ion irradiation exposure and mechanical testing to understand the fundamental mechanisms responsible for the alloys’ thermal stability, radiation tolerance and mechanical performance. The insights from this research will inform the design of more resilient alloys for fusion applications.

In addition to the computational resources they use at Stony Brook, Trelewicz and his lab group are using the HPC cluster at the CFN — and those at other DOE facilities, such as Titan at Oak Ridge Leadership Computing Facility (a DOE Office of Science User Facility at Oak Ridge National Laboratory) — to conduct large-scale atomistic simulations as part of the project.

“The length scales of the structures we want to design into our materials are on the order of a few nanometers to 100 nanometers, and a single simulation can involve up to 10 million atoms,” said Trelewicz. “Using HPC clusters, we can build a system atom-by-atom, representative of the structure we would like to explore experimentally, and run simulations to study the response of that system under various external stimuli. For example, we can fire a high-energy atom into the system and watch what happens to the material and how it evolves, hundreds or thousands of times. Once damage has accumulated in the structure, we can simulate thermal and mechanical forces to understand how defect structure impacts other behavior.”

These simulations inform the structures and chemistries of experimental alloys, which Trelewicz and his students fabricate at Stony Brook University through high-energy milling. To characterize the nanoscale structure and chemical distribution of the engineered alloys, they extensively use the microscopy facilities at the CFN — including scanning electron microscopes, transmission electron microscopes, and scanning transmission electron microscopes. Imaging is conducted at high resolution and often combined with heating within the microscope to examine in real time how the structures evolve with temperature. Experiments are also conducted at other DOE national labs, such as Sandia through collaboration with materials scientist Khalid Hattar of the Ion Beam Laboratory. Here, students in Trelewicz’s research group simultaneously irradiate the engineered alloys with an ion beam and image them with an electron microscope over the course of many days.

“Though this damage does not compare to what the material would experience in a reactor, it provides a starting point to evaluate whether or not the engineered material could indeed address some of the limitations of tungsten for fusion applications,” said Trelewicz.

Electron microscopy at the CFN has played a key role in an exciting discovery that Trelewicz’s students recently made: an unexpected metastable-to-stable phase transition in thin films of nanostructured tungsten. This phase transition drives an abnormal “grain” growth process in which some crystalline nanostructure features grow very dramatically at the expense of others. When the students added chromium and titanium to tungsten, this metastable phase was completely eliminated, in turn enhancing the thermal stability of the material.

“One of the great aspects of having both experimental and computational components to our research is that when we learn new things from our experiments, we can go back and tailor the simulations to more accurately reflect the actual materials,” said Trelewicz.

Other Projects in Trelewicz’s Research Group
The research with tungsten is only one of many projects ongoing in the Engineered Metallic Nanostructures Laboratory.

“All of our projects fall under the umbrella of developing new metal alloys with enhanced and/or multifunctional properties,” said Trelewicz. “We are looking at different strategies to optimize material performance by collectively tailoring chemistry and microstructure in our materials. Much of the science lies in understanding the nanoscale mechanisms that govern the properties we measure at the macroscale.”

Through a National Science Foundation CAREER (Faculty Early Career Development Program) award, Trelewicz and his research group are exploring another class of high-strength alloys — amorphous metals, or “metallic glasses,” which are metals that have a disordered atomic structure akin to glass. Compared to everyday metals, metallic glasses are often inherently higher strength but usually very brittle, and it is difficult to make them in large parts such as bulk sheets. Trelewicz’s team is designing interfaces and engineering them into the metallic glasses — initially iron-based and later zirconium-based ones — to enhance the toughness of the materials, and exploring additive manufacturing processes to enable sheet-metal production. They will use the Nanofabrication Facility at the CFN to fabricate thin films of these interface-engineered metallic glasses for in situ analysis using electron microscopy techniques.

Trelewicz and his group are also exploring the deformation behavior of metallic “nanolaminates” that consist of alternating crystalline and amorphous layers, and are trying to approach the theoretical limit of strength in lightweight aluminum alloys through synergistic chemical doping strategies (adding other elements to a material to change its properties).

“We leverage resources of the CFN for every project ongoing in my research group,” said Trelewicz. “We extensively use the electron microscopy facilities to look at material micro- and nanostructure, very often at how interfaces are coupled with compositional inhomogeneities — information that helps us stabilize and design interfacial networks in nanostructured metal alloys. Computational modeling and simulation enabled by the HPC clusters at the CFN informs what we do in our experiments.”

Beyond his work at CFN, Trelewicz collaborates with his departmental colleagues to characterize materials at the National Synchrotron Light Source II — another DOE Office of Science User Facility at Brookhaven.

“There are various ways to characterize structural and chemical inhomogeneities,” said Trelewicz. “We look at small amounts of material through the electron microscopes at CFN and on more of a bulk level at NSLS-II through techniques such as x-ray diffraction and the micro/nano probe. We combine this local and global information to thoroughly characterize a material and use this information to optimize its properties.”

Future of Next-generation Materials
When he is not doing research, Trelewicz is typically busy with student outreach. He connects with the technology departments at various schools, providing them with materials engineering design projects. The students not only participate in the engineering aspects of materials design but are also trained on how to use 3D printers and other tools that are critical in today’s society to manufacture products more cost effectively and with better performance.

Going forward, Trelewicz would like to expand his collaborations at the CFN and help establish his research in metallic nanostructures as a core area supported by CFN and, ultimately, DOE, to achieve unprecedented properties in classical materials.

“Being able to learn something new every day, using that knowledge to have an impact on society, and seeing my students fill gaps in our current understanding are what make my career as a professor so rewarding,” said Trelewicz. “With the resources of Stony Brook University, nearby CFN, and other DOE labs, I have an amazing platform to make contributions to the field of materials science and metallurgy.”

Trelewicz holds a bachelor’s degree in engineering science from Stony Brook University and a doctorate in materials science and engineering with a concentration in technology innovation from MIT. Before returning to academia in 2012, Trelewicz spent four years in industry managing technology development and transition of harsh-environment sensors produced by additive manufacturing processes. He is the recipient of a 2017 Department of Energy Early Career Research Award, 2016 National Science Foundation CAREER award, and 2015 Young Leaders Professional Development Award from The Minerals, Metals & Materials Society.