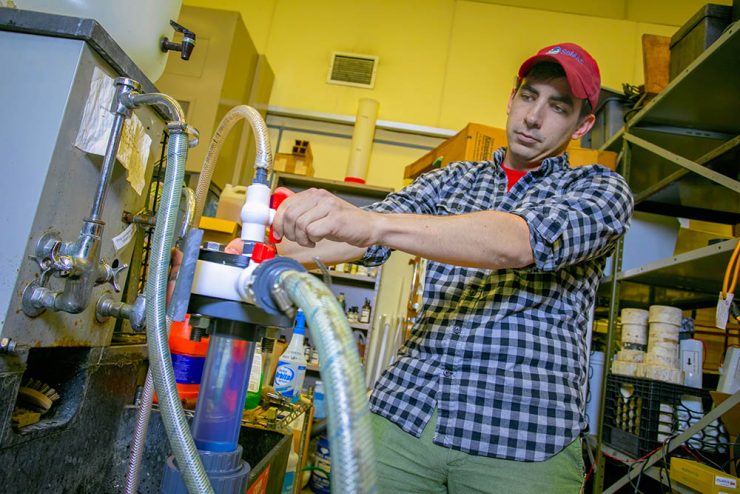 Maybe it was going hunting and fishing with his grandmother. Or being glued to the Discovery Channel as a kid. Either way, Chris Crosby’s love of nature was too strong to ignore, and led him to enroll at Stony Brook University following a tour of duty with the United States Army.

Crosby ‘19 went to college right out of high school, but soon realized he was there for the wrong reasons.

“I mostly went because all of my friends were going and I didn’t know what else to do,” said the Oakham, Massachusetts native.

After nine months working in the family business, a machine shop, he joined the Army.

“I was trained as an interrogator and sent to Hawaii, where there was no one to interrogate,” said Crosby. That led to him performing an array of random jobs ranging from occasional Humvee mechanic to shelter construction to map builder.

Off-duty he tried his hand at SCUBA instead, which rekindled his passion for the natural world. At the end of his tour of duty in the Army, Crosby realized that he was ready to return to academia so he focused on searching for schools with reputable marine biology programs. Since he was also looking to head back home to the Northeastern U.S., Stony Brook proved to be a perfect fit.

After two semesters of basic biology he was ready to make the plunge into the School of Marine and Atmospheric Sciences at Stony Brook (SoMAS) core classes and focus entirely on marine life.

He cites Conservation Biology, taught by Liliana Davalos, as one of his favorite classes as Professor Davalos challenged the class to figure out on its own the issues that face the living world we inhabit and devise solutions.

Chris also credits Conservation of Seabirds, taught by Emily Runnells and Marine Ecology, taught by Jeff Levinton for helping shape his academic interests, specifically mentioning Runnells’ use of academic papers from students to guide her lectures and Levinton’s use of humor and anecdote to unearth “gold mines of information.”

In the summer of 2018, Crosby interned at Volunteers for Wildlife, Inc., in Locust Valley, New York, caring for and treating injured and orphaned wild animals native to Long Island, helping them prepare for eventual release into their natural ecosystems.

“Skills I got to hone or learn while at Stony Brook are too lengthy to list,” said Crosby. “Some great educators aided me in the never-ending quest to polish up my writing. I learned more about statistics than I ever thought possible.” And in the ESHOP,  the Instrument lab at SoMAS, Tom Wilson and Alex Sneddon have each taken me under their wings to instill a bit of know-how when it comes to their areas of expertise — Alex in meteorological instruments and fieldwork — and Tom in oceanographic equipment and engineering.”

Chris worked on an ESHOP invention, the Vortex Debubbler, which uses centrifugal force and gravity to extract bubbles in sea water flowing to high precision ship’s instrumentation, greatly increasing data accuracy. During his three years working at the ESHOP, SoMAS has sold 75 debubblers to institutions worldwide – a sizable fraction of about 229 units supplied since Tom Wilson and former ESHOP colleague Henry Harrison invented the debubbler in 1987.

This is where working at his father’s machine shop training came in handy. Chris has also worked on setting up and installing atmosphere radars for SoMAS that have found their way from the Hamptons to New York City buildings. And most recently, he has worked on SoMAS’s new Slocum Glider, an unmanned submersible that will take autonomous readings of the waters off the southern coast of Long Islands for weeks at a time.

By summer’s end, Chris will head to the Department of Ecology and Evolution at Rutgers University and begin pursuing his PhD, to study how foxes and other scavengers that adapt well to human environments are affecting the coastal ecosystems of New Jersey. His eventual dream is to work in wildlife management or conservation biology.

“I don’t care whether I work at an academic institution, for the government, or for a private organization,” he said. “I just want my work to have a positive impact on the world so that I can leave the planet a little healthier than I found it.”