Charting a Path Toward Bird-Friendly Buildings 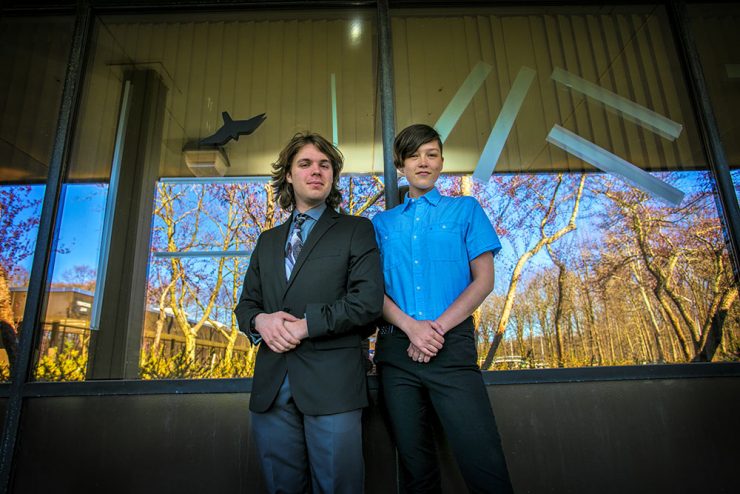 Two Stony Brook freshmen recently took on a big issue on campus and beyond and got major life lessons in teamwork, experiential learning, how to organize a campaign and how to plan an event.

“This is a remarkable example of the passion and leadership of our undergraduate students in trying to save the lives of migratory birds,” said Alexander Orlov, Stony Brook Materials Science and Chemical Engineering Associate Professor.

The students – Garret Van Gelder and Katherine Houston – brought together policy makers, architects, the largest glass company in the US and campus administrators to help come up with solutions to a pressing problem that kills almost 1 billion birds worldwide annually.

“Their altruism, passion for the environment and empathy are truly inspirational to all of us. This is a great example of future leaders Stony Brook is educating to make humanity kinder and better,” Orlov added.

Garret and Katherine each conducted independent ecological research in high school, which set the stage for them to meet at the University of Albany JSHS Symposium in 2018.

“We never expected to meet again after the symposium, but when we both began attending Stony Brook in the same year due to similar interests, we wound up working in the same circles,” said Katherine in reference to her partnership with Garret.

“The issue of bird strikes surfaced at a weekly seminar in the Department of Ecology and we realized as students that we might have a unique position to spread awareness on the topic,” she added.

They had both noticed bird strikes while walking between classes, and after consulting with Professor Doug Futuyma and PhD student Michael Schrimpf from the Department of Ecology and Evolutionary Biology, the campaign was born at the local level.

Their search to find authorities on the subject began with Christine Sheppard from the American Bird Conservancy. “Her help in connecting us with speakers was invaluable,” said Katherine. When the students learned of Assemblyman Steve Englebright’s past collaboration with Stony Brook, they reached out to him.

“There is a social network in the world of bird conservation connecting those who have worked on similar projects in the past,” said Katherine. That network led to Setauket naturalist John Turner and Orlov.

“By pure coincidence, Guardian Glass, the largest glass company on the U.S. market, has developed a solution which will be on the market later this year,” said Orlov. “It is a glass that birds can see but people cannot.”

Englebright, who chairs the NY State Assembly Committee on Environmental Conservation, credited Turner for first bringing the bird strike problem to his attention ten years ago but said it was viewed by many as “an overreach for its time.” He was criticized by the Daily News, for example, who used it as an example of government being out of control.

When the issue failed to gain traction in an oppositional Senate, the emphasis shifted to public education.

“Birds are not only beautiful,” he said, “but in an urban setting they are the primary exposure citizens have to nature,” he explained.

Englebright said that as chair of what is now a very different Legislature and with a modified approach, there may be more success. “Last year we sponsored legislation titled, “The Birds and Bees Protection Act,” linking the crisis facing both of those pollinators.

In January, Englebright reintroduced the “Bird-Friendly Building Council Act,” officially titled Assembly Bill 4055, to establish a council to promote the use of bird-friendly building materials and design features in buildings; research the magnitude of problems facing birds colliding with buildings; identify existing and emerging products, technologies and concepts to reduce or eliminate bird mortality from building collisions; and develop public awareness.

Turner told the attendees that 56 percent of bird mortality occur with low-rise structures, and that windows are the number two cause of mortality behind feral cats. Certain bird species are much more prone to collisions, he explained.

Much of the problem has to do with optics — bird optics. Turner told the audience that birds, do not see what we see — their range is less monocular or forward-facing than ours and they see ultraviolet light that we do not. More adapted to focus on looking for food or avoid being food, most birds have eyes that allow them to see a wide view of their surroundings.  They also mistake reflections of the environment in glass structures for the real thing.

Turner listed some of the frequently-used devices that do not help reduce bird/building collisions, which include: silhouettes of hawks, single window decals, visual markers spaced too far apart, plastic owls, noise deterrents and treatments applied to the insides of windows. He said the majority of birdstrikes occur during the fall and spring migrations.