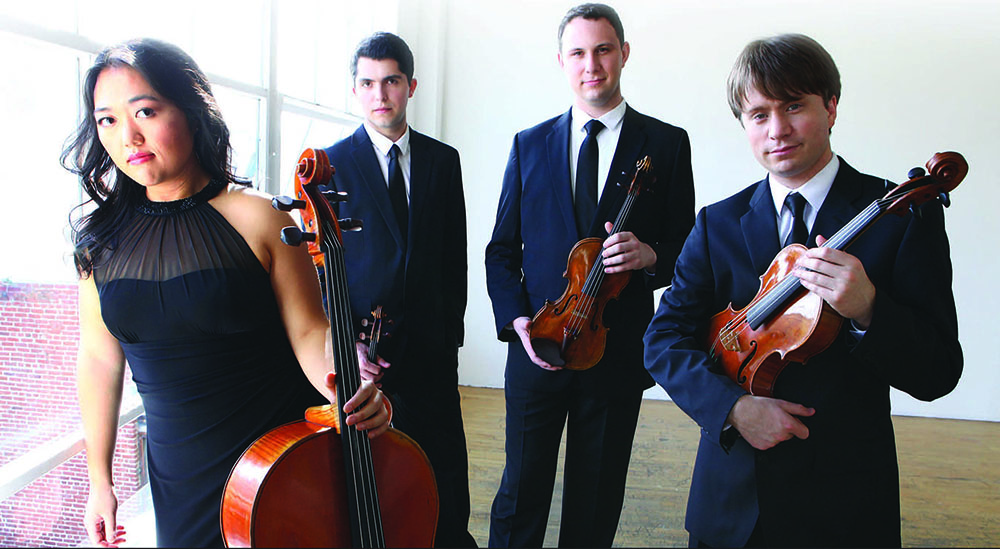 The Calidore String Quartet — on a two-year residency in Stony Brook’s Department of Music mentoring with the Emerson String Quartet — won the $100,000 grand prize at the inaugural M-Prize International Chamber Arts Competition at the University of Michigan on May 19. This is the largest monetary award of any chamber music competition in the world. The group also won performances in coming seasons on six important arts series in America and Germany.

“The incredible exposure of the M-Prize Competition combined with its unprecedented financial support gives us the ability to create and promote new projects like recordings, commissioning new music and other creative initiatives,” said the Calidore String Quartet. “The M-Prize will also support our growing international presence, allowing us to share our music across the globe. We look forward to performing and developing a relationship with the prestigious series that partnered with the competition. As the inaugural grand-prize winners we will strive to expand the audience for chamber music and carry on the legacy of our art form.”

More than 170 groups applied from 13 countries in senior and junior divisions, making M-Prize — in its inaugural year — the largest competition of its kind. Twenty-nine ensembles were invited to Ann Arbor to compete as semi-finalists.

The Calidore Quartet was the finalist in the strings category, but another Stony Brook-affiliated group, Yarn/Wire, was the finalist in the open division category. Yarn/Wire, a contemporary piano and percussion quartet, are alumni of the Stony Brook Department of Music and will be in residence on campus this summer. All four members — pianists Laura Barger and Ning Yu, and percussionists Ian Antonio and Russell Greenberg — received their DMA degrees from Stony Brook.

“We had such a great time throughout the entire M-Prize process and are thrilled that the organizers included an ‘open’ category, which enabled us to take part. It is a testament to Stony Brook’s phenomenally talented and supportive faculty, staff and fellow students that two University-affiliated ensembles were awarded top prizes,” said the members of Yarn/Wire.

This summer’s Yarn/Wire Institute welcomes composers and performers to collaborate from July 6 through July 15 at Stony Brook.

“We are delighted, though not entirely surprised, that two of the top three prize-winners of what is likely to become the foremost chamber music competition in the world have affiliations with the Stony Brook Department of Music,” said Chair Perry Goldstein. “The Calidore Quartet has gone from strength to strength during their residency here, recording two compact discs, winning a two-year Borletti-Buitoni Trust Fellowship, joining Chamber Music Society of Lincoln Center Two for a three-year residency, and performing at Carnegie Hall. The department’s focus on excellence in the standard as well as the modern repertoire was recognized in the awarding of two of the top three prizes to the Calidores, a traditional string quartet, and Yarn/Wire, a cutting-edge ensemble specializing in new music. Our remarkable faculty also bears some of the credit for the ensembles’ achievement.”

When the coronavirus pandemic began, one Stony Brook University Hospital (SBUH) nurse came out of retirement to join her daughter on the frontlines. Mary Beth Patterson retired from SBUH in December 2018 after being...