Bilal Haider ’17: Unleashing the Promise of The Sub-Atomic World 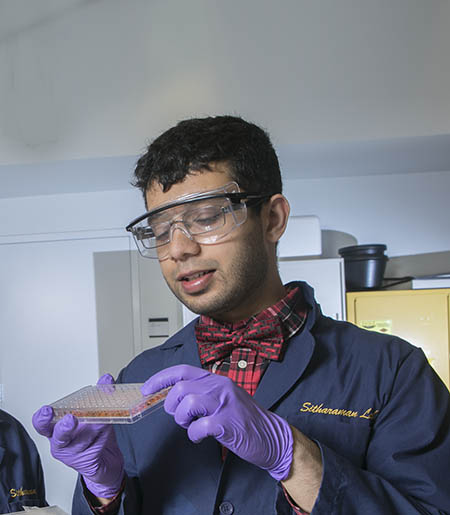 Working in Balaji Sitharaman’s Stony Brook laboratory with graduate student Drasti Kanakia, the pair wanted to see whether graphene nanoribbons and nanoplatelets could deliver genetic material to neural cells to potentially treat Alzheimer’s disease. But their preliminary steps involved delivering these structures to cancer cells, which are easier to deal with.

Professor Sitharmaman’s lab is applying for grants this season to increase funding in nanotechnology research for biomedical engineering.

“The research revealed that nanoplatelets are less cytotoxic, or damaging to cells, than nanoribbons,” said Bilal. “Therefore, we found out that when we did add genetic material in cancer cells and in neurons, we should only use nanoplatelets.”

Bilal is awaiting review and placement of his research before it can be published.

While at Stony Brook, Bilal was also instrumental in providing a hands-on science experiment to 250 fifth graders in five Long Island elementary schools, helping to promote early interest in STEM education through the Science Ambassador Program sponsored by Bio-Rad, a chemical supply company.

As part of the Department of Biomedical Engineering’s honor society Alpha Eta Mu Beta, Bilal and his group taught these fifth graders about DNA with a “Genes in a Bottle” experiment. Students isolated their own DNA from their cheek cells and the DNA was stored in amulet that became a keepsake necklace.