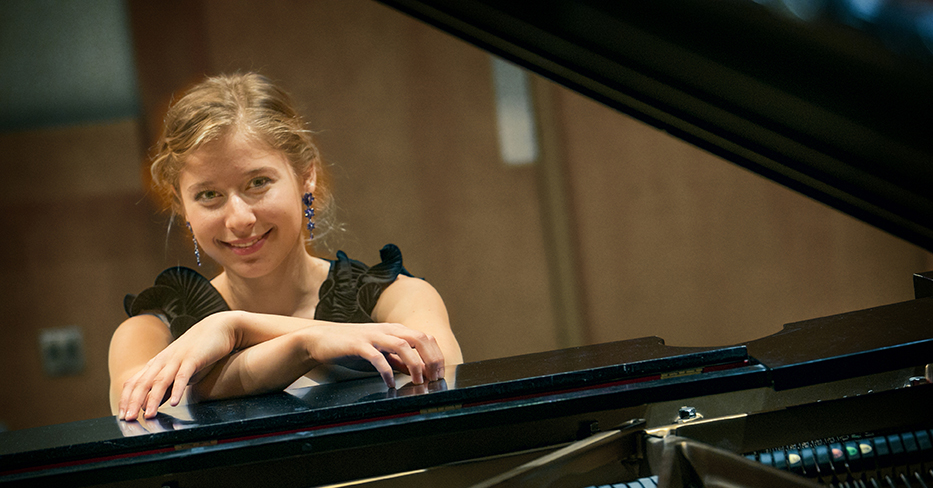 As magical as the Russian fairy tales her grandmother used to read to her as she drifted off to sleep, Bella Gurevich’s life has whisked her from the ancient castles of Ireland to the hallowed performance spaces of Carnegie Hall.

An English major and a University Scholar, Bella’ 17 has studied piano at Juilliard, performed at Carnegie Hall, interned at the Metropolitan Museum of Art and written songs to teach children grammar. And her journey is just beginning.

As a child, Bella fell in love with the Medieval period, leading to a lifelong fascination with the literature, art and music of that era.

“From as early as I could remember, it was hard to take books away from me,” said Bella. “I plowed through novel after novel, eagerly living inside the worlds of each work, envisioning the castles, courts and declarations of love and war.”

No wonder that in 2014 Bella took advantage of Stony Brook’s Study Abroad program in Ireland, famed for its castles, churches and rich history.

In Stony Brook’s Department of English, she has also found like-minded souls. “I am surrounded by an incredible community of scholars, both professors and students, who continually challenge and inspire me to approach the field in new, relevant ways, while maintaining a love and respect for the traditional aspects of English literature,” said Bella.

When she took a class with Professor Sara Lipton about autobiographical texts of the Middle Ages, Bella became inspired to make a presentation on religious conversions during that period for the Department of History’s Undergraduate Research and Creative Activity (URECA) Conference.

Bella followed that up this past summer with a nine-week internship at The Cloisters Museum and Gardens, a branch of the Metropolitan Museum of Art dedicated to medieval art. As one of eight interns selected from more than 200 applicants, Bella conducted workshops with day campers and presented the results of nine weeks of research in an hourlong Special Gallery Talk for a large group of experts and professionals in the field.

“For my gallery talk, I wove together a sequence of works of art found throughout the museum that would invite the audience to imagine the music produced during the Middle Ages,” said Bella.

Each work of art on the tour evoked a different kind of sound dictated by the instruments depicted, the musical notation and the place of origin of the work. To bring the history and music alive, Bella invited an opera singer to perform an antiphon, a type of liturgical chant.

Bella’s interest in music and sound carries over to her literary research, with one of her foremost interests in medieval literature being the examination of the sound of the English language.

“The sound of any language at any particular time has a music of its own,” she said.

Russian was actually Bella’s first language. She learned English when in pre-school, with proficiency in Latin and Spanish following.

“While I very much enjoy the research, nothing gives me greater joy than to be able to spark this same interest in others,” Bella said of both her Cloisters and URECA experiences.

Meanwhile, Bella proved the truth of the old joke about practice and Carnegie Hall. In 2009, while in middle school, she studied under piano instructor Nana Shi, who sensed Bella’s level of competency. Shi persuaded her to enter the International Protégé Music Festival, in which she was one of the winners. That earned Bella a chance to perform Chopin’s Fantasie Impromptu at Carnegie Hall, an experience she treasures as one of the greatest in her life. In preparation for that moment, Bella upped her practice time from six to eight hours per day.

At the start of her junior year in Stony Brook, Bella relied on her musical prowess as a pianist to combine disciplines, writing songs to teach children grammar in a fun and memorable way.

“I made an album of eight songs, each of which teaches a different part of speech,” said Bella. “Some are really out there, like my adaptation of Gwen Stefani’s ‘Hollaback Girl.’ ’’

As president of Alpha Nu Zeta, the Stony Brook chapter of Sigma Tau Delta, the International English Honor Society, Bella is sharing her love of literature with Long Island State Veterans Home residents through readings and workshops. And at the Stony Brook Writing Center, she enjoys tutoring non-native English speakers, helping them to develop their communication skills through writing.

“One of the toughest obstacles that students find is actually doing the writing — they have the ideas,” said Bella. “Once he or she recognizes their true interest, it isn’t hard to get the pen going. Creativity cannot be taught; it can only be inspired.”

Bella’s own creativity has been inspired by one of her professors and mentors. She said that Professor Kevin Clouther opened her up to the world of literary translations — a process that requires not just academic knowledge of a language, but also an understanding and love of the subject being written. During her independent study with Clouther, Bella joined the Emerging Literary Translators’ Network in America, and has enjoyed translating poetry from Russian into English.

As enamored as she is with the distant past, Bella is living very much in the moment and feels quite fortunate to reap its many benefits.

“I would never give up living in the 21st century for anything. I love learning about the past, but it would not be possible without today’s technology,” said Bella. “X-ray implements can figure out an archaeological artifact’s chemical makeup. Infrared light is used to reveal underdrawings in paintings. Even computers — something we often take for granted — offer us the world of research at our fingertips.”

She added that the relationship between the past and present is symbiotic, however.

“While the present helps us to learn about the past, the discoveries we make about our people’s history make it possible to reconsider our ways, be flexible and learn how to move forward socially, scientifically and culturally,” she said.