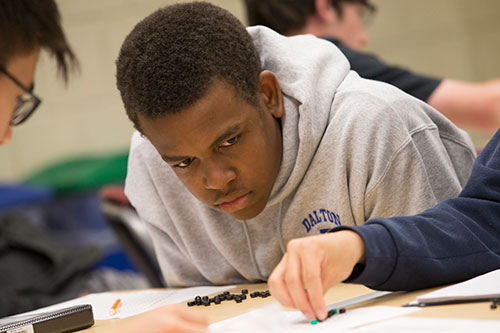 Promoting social and economic mobility takes many forms at Stony Brook University. To be sure, programs such as the Educational Opportunity Program/Advancement on Individual Merit (EOP/AIM) were created specifically to help students who are economically disadvantaged, yet there are academic divisions on campus offering initiatives serving that same purpose — even though it is not their primary function.

The College of Arts and Sciences (CAS) is one such example. Since its formation in the 1990s, CAS has played a major role in Stony Brook’s growing national and international reputation through its humanities and fine arts, life sciences, physical sciences and math, and social and behavioral sciences programs.

With the unveiling last summer of its Pre-College Summer Institute — a free weeklong program aimed at high school sophomores and juniors from four high-needs districts — CAS has firmly committed to equalizing opportunities for students who comes from low-income families.

Through a series of mini courses, workshops and presentations, students learn about a breadth of disciplines, hone their skills, and experience what it’s like to go to college. They stay in a residence hall, tour the campus and take courses based on their interests from various academic areas, including anthropology, foreign languages and theater, to name a few. The students also attend presentations on financial aid, admissions, study abroad and research opportunities.

“Our goal is to let students know that college is attainable and that we believe in them and their ability to succeed,” said Sacha Kopp, dean of the College of Arts and Sciences. “Reaching high school students this way helps them launch their college search process and empowers them to achieve acceptance into a college of their choice.”

Much of the Pre-College Summer Institute’s success is predicated on the volunteer efforts of Stony Brook faculty and staff.

“It means a lot that so many members of CAS and the University see value in the mission of providing opportunities for students from economically disadvantaged backgrounds,” said Kopp.

That value is easily quantified by comparing the students’ perceptions on the first and final days of the program. Last summer, when students first arrived on campus, staff asked them if they could afford to go to college. Only five of the 50 participants answered yes. On the final day of the program, after hearing presentations about grants, scholarships and available opportunities, all the students said they thought college was a realistic goal.

“To see that change and know that we are able to help high school students work toward an attainable goal is why I chose to work in public higher education,” said Kopp.

Helping an economically disadvantaged student realize his or her full potential can be as rewarding for a faculty member as it is for the student. Just ask David Kahn, assistant professor of mathematics at the Institute for STEM Education (I-STEM).

Kahn oversees several I-STEM outreach programs in math and science for middle and high school students that offer access to college resources. Although I-STEM serves all demographics, many students from high-needs school districts enroll in the programs.

“Let’s say you’re in ninth grade at a high-needs school district and you’ve never done DNA splicing. You can come here and do that in an actual college lab,” Kahn said.

I-STEM’s programs run yearlong, even on Saturdays and during the summer. The goal of these initiatives is simple: Prepare students for the real world.

“There are a lot of careers that require a reasonable sophistication in math and science. You don’t have to be a mathematician or scientist, but you may be expected to sit in front of a computer and be comfortable with a software program like Excel, for example, and you may never have been exposed to that,” Kahn said. “These programs give kids a taste of what it’s like out there and the chance to get better in this kind of math and science.”

There is a social component as well.

He recalled one student coming to Stony Brook who is an alumnus of the two-week High School Summer Math Program, a residential summer camp. The student, who hailed from an underserved school district in Brooklyn, wanted a more challenging environment. He found it through the camp’s high-level curriculum, which exposes students to advanced branches of mathematics —including knot theory, cryptography and number theory— that are not typically taught in many high schools.

Kahn said that he expects the student, who plans to major in math, to thrive at Stony Brook.

“Coming to Stony Brook after taking a program like the math camp can help him climb over any barrier to be able to make it because now he will also have support,” he said.

In addition to overseeing the I-STEM outreach programs, Kahn runs a tutoring company in New York City that primarily serves the private school crowd, or as he sees it, “the children of the 1 percent.”

Although he said he enjoys helping those students — “many of whom are wonderful people” — he doesn’t derive much satisfaction, for example, “helping a fourth-generation Princeton kid become the fifth generation.”

On the other hand, assisting students who come from schools with few resources, such as some of those who participate in the I-STEM programs, is especially rewarding for Kahn, he said.

“If I can help somebody who comes from a poor, disadvantaged background break into a new circle, it’s much more satisfying,” he said. “Now I know I’m really making a difference in somebody’s life — even if it’s a very small difference.” 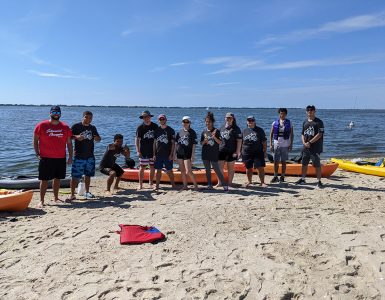