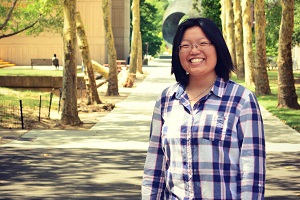 The 2017 “22 under 22 Most Inspiring College Women” list from hercampus.com has been released, and it features Ann Lin, a senior in the Stony Brook University Honors College double majoring in Biochemistry and Economics. In Spring 2017 Lin was recognized nationally as a Goldwater Scholar and she has drawn attention as a rising star at scientific meetings and hackathons.

Lin won an Outstanding Presentation award at the Mount Sinai Icahn School of Medicine Undergraduate Research Symposium in the category of Cancer Biology/Immunology. She has been in the spotlight at CalTech, where she was awarded “Best Social Hack” for the creation of a web platform that helps facilitate the sharing of biological reagent between laboratories and promote intra-lab communication; and at Rochester University, where she was honored with a “Best Web Hack” for creating a web platform that helps patients to compile all of their medical records.

Undergraduate research has been a major commitment for Lin throughout college. In her freshman year, she gained a strong foundation in laboratory techniques by working in Laurie Krug’s lab in Molecular Genetics and Microbiology studying the Role of Viral Uracil DNA Glycosylase (UNG) Activity in Murine Gammaherpesvirus’ (MHV) Latency Mechanism. She also honed many research skills as a team member of iGEM, a group that earned a silver medal in the 2015 iGEM expo/competition and presented a project on Regulating Blood Glucose Levels with Peptide Secreting Microbes.

Now Lin divides her time between two primary research groups. She is working on her senior honors thesis, studying the evolution of multicellularity using a yeast model, under the mentorship of Gábor Balázsi, Biomedical Engineering and the Laufer Center for Physical and Quantitative Biology. She also has devoted a significant amount of time and effort during the past two years in the lab of Jason Sheltzer at Cold Spring Harbor Laboratory, where she analyzes survival-associated genes in cancer and works to “Determine the role of Maternal Leucine Zipper Kinase (MELK) in Triple Negative Breast Cancer.” Lin has already co-authored a paper on this work.

Lin is also a Fulbright Scholar, completing her post-graduate study in Norway exploring “organ on a chip” technology — developing an artificial human organ system that will accurately show the response of a human body to different drugs. She was then selected for the National Science Foundation (NSF) Graduate Research Fellowship (GRFP) and is currently pursuing her PhD at Stanford.

Click here for more about Ann Lin, including an interview with URECA Director Karen Kernan.