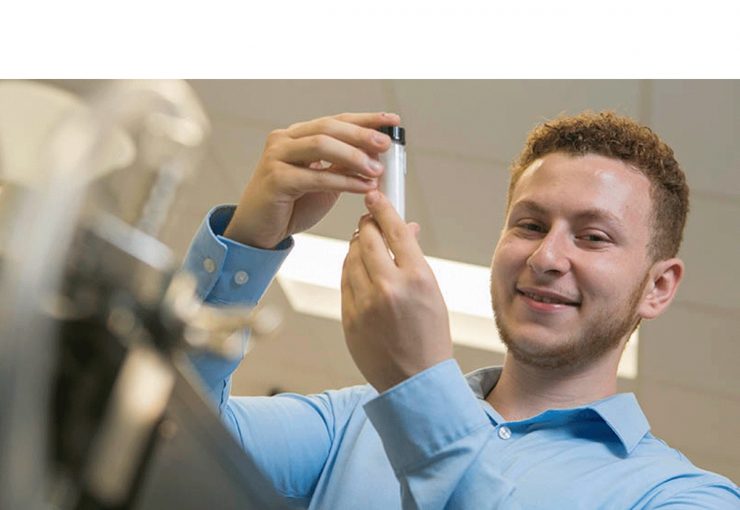 Stony Brook has taken Alexander Kling ’20 from Earth to Mars as he pursues hands-on undergraduate research in the Geosciences Department of the College of Arts and Sciences.

In summer 2017, Alex began working primarily under the mentorship of Prof. Timothy Glotch in the Vibrational Spectroscopy Laboratory where he has joined the “Remote, In Situ and Synchrotron Studies for Science and Exploration” /  RIS 4E TEAM , and gained experience in preparing samples and taking spectra measurements of powdered mineral mixtures using various spectroscopic tools. More recently, he co-authored a forthcoming paper in the Journal of Geophysical Research: Planets on the regolith of Phobos, a moon of Mars.

“I’ve learned so much more in the lab than in my classes, because it’s hands-on learning,” Alex said. “I find that I retain information more from doing research. Hands on experience will always stick more than lecture material because you’re applying what you know. ”

Alexander Kling initially got to know the Geosciences department at Stony Brook as a high school participant in the summer GeoPREP program where he had the opportunity to conduct a mini-research project with Prof. Gil Hanson.

As an undergraduate he has found new opportunities through URECA (Undergraduate Research & Creative Activities). Early on, Alex had the opportunity to join a research project under the direction of Prof. Troy Rasbury and Dr. Steven Jaret on U-PB ages for zircon from SBU campus loess: this project involved hand-picking zircon grains using an optical microscope and tweezers, and then operating a mass spectrometer coupled with a laser ablation system in order to determine their age and the source of the sediments. Alex presented this project at both the URECA campus symposium, and the 24th Conference on Geology of Long Island and Metropolitan New York, in April 2017.

Below are excerpts from his interview with Karen Kernan, URECA Director:

Tell me about how you first got involved in research at Stony Brook.
So it goes back to high school. I participated in this program called GeoPREP – a summer research program to get high school students involved in geosciences. I did that the summer after both freshman and sophomore years of high school. My first summer, we got exposure broadly to different fields within geosciences; and the second summer, I was able to do an individual research project looking at soil pH on campus. That was with Prof. Gil Hanson.

So your interest in geosciences goes back a few years!
Yes, I’d say it actually goes back to 8th grade when I took Earth Science. I still remember my teacher, Mr. Thompson, who I believe was a graduate of SB …He’s the one who really spurred my interest in the field!

Tell me about getting involved in research as an undergraduate.
It’s something I was set on – even before orientation. In my first semester, I had a class (GEO 102) with Prof. Tim Glotch and I knew even from the first class that what he was talking about – planetary geology – was something I really wanted to do. So soon into the semester, I went to him and asked if I could do research with him. He told me to come back when I have more experience. I asked other professors that semester as well about research opportunities – but no one was really looking for anyone at the time. So when the fall semester ended, I thought no one wanted me, and that I’d have to wait a bit longer before getting involved….But then over the winter break, I got an email out of the blue from Steven Jaret (a graduate student at the time, co-advised by Profs. Glotch and Rasbury) that said: “I heard that you were looking for research. I’m looking to take on an undergrad for a certain project. Your name was given to me by Gil and Deanne.”   And I remember thinking, even though it wasn’t planetary geology, that it sounded interesting and would be great experience. So I met with him and we started working on a project in the spring. And other opportunities kept coming up from then on.

What was that first project about?
That project involved looking at zircons found within the loess on campus – analyzing zircons to determine their age (and source). I ended up giving a small talk on that project at the Long Island Geologists Conference. And I presented the final results at the URECA Celebration that spring. Then after the semester ended – when I met again with my advisor, she mentioned that Prof Glotch might be looking for someone. So when I talked to him at this stage, he said “you’ve got the experience now. You’ve had minerology (Geo306). You’ve done research – I think you’re ready.” So I started working with him – and I’m still in his research group, the Vibrational Spectroscopy Laboratory.

Although I didn’t plan to actually start doing research with him until the fall semester, just two days after coming home for the summer, Prof. Deanne Rogers emailed me about another proposal that she and Prof. Tim Glotch were working on – for the OSIRIS-REx mission. So I started working on that project which involved spectroscopy of minerals. Some of it was grueling work, and I was commuting in from NYC each day, but it was worth it and it gave me the experience I needed for the project that I would begin working on in the fall which was also spectroscopy work –for a different project, one that involved temperature dependence of visible to near infrared spectral properties of minerals. Most of the work for that project got done in the fall 2017 semester, but I ended up finishing some of the data analysis in the spring – and then presented it at the URECA Celebration this past April. I also had the opportunity to present a poster on it at a conference this summer in California: the NASA Exploration Science Forum.

That’s exciting! Was it helpful to have had previous experience presenting a poster?
I definitely think so. It was a good rehearsal for knowing what to expect. The main difference with going to the conference in CA and presenting at URECA was the audience. At URECA, not everyone is a geologist and so you have to explain your project more broadly. But at the NASA conference, I got some very specific questions – they could pinpoint one small thing in your data. Everyone at the conference knew the topic much better than I did!

Tell me about some of your other research projects.
The OSIRIS-REx proposal got accepted in late November/December. So starting last winter, I stayed on campus and began working on the OSIRIS-REx project from the winter into the spring. I also got assigned, along with another student, Dylan McDougall, to work on another side project – that involved a lot of data collection for a paper that Prof. Glotch was writing. And then this summer, I participated in an REU program at the American Museum of Natural History, working with Dr. Denton Ebel —basically making x-ray maps of meteorite thin sections and doing image analyses of them.

You have done quite a range of research projects. How have these experiences augmented your education?
I’ve learned so much more in the lab than in my classes, I think, because it’s hands-on learning. For me, I find that I retain information more from doing research. Hands on experience will always stick more than lecture material because you’re applying what you know. You’re learning on the spot. You really need to know what you’re doing whereas if you take a lecture – once you’ve taken your final, the material sometimes goes out of your head.

When I took my minerology class for example – I thought I was done with it after the final. (It’s probably the most important course in geology!) But in doing the research, I keep having to refer back to it.  So a lot of the information is sticking more now – because through the research, I’m going back to that information, and using that information.