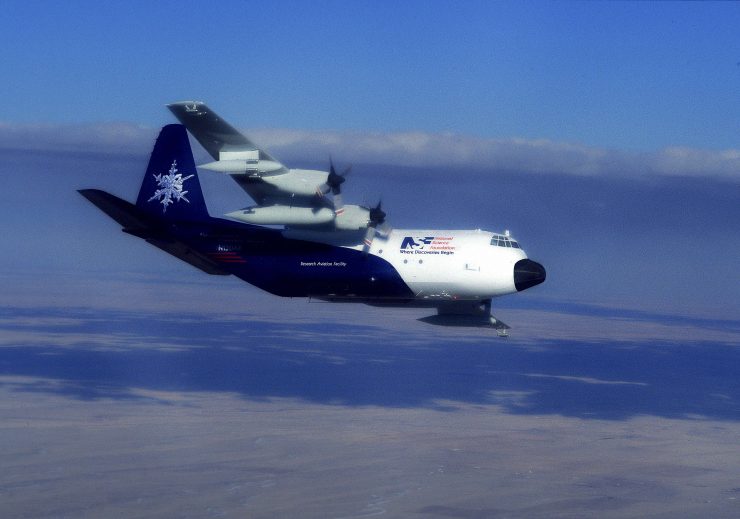 Stony Brook University researchers will lead a team of scientists from around the country to study air pollution and the chemical processes in the atmosphere that create or transform pollutants, such as ozone and particulate matter, in the New York City metropolitan area.

Over the course of the three-year study, funded with a $3.5 million grant from the National Science Foundation, scientists will fly a Hercules C-130 research aircraft for approximately 120 hours, spanning night and day. During the project, named GOTHAAM, for Greater NY Oxidant, Trace gas, Halogen, and Aerosol Airborne Mission, the researchers will measure different chemicals and pollutants in the air over the 300-mile metro area, encompassing New York City, Long Island, and parts of upstate New York and Connecticut.

“New York City, for the United States, is going to represent some of the most complex conditions not just because of the geographic component, with the interplay of marine, forests and urban environments, but also because we have the highest population density,” said John Mak, Professor in Stony Brook’s School of Marine and Atmospheric Sciences, who is the study’s lead principal investigator. “The biggest reason I wanted to do this study here was the number of people that it impacts. The population density is the highest in the nation and the magnitude of the emissions means you’re going to have really interesting large-scale chemical processes that are occurring and are impacting human health.”

Despite significant efforts to reduce air pollution in the NY region, the metro area has among the worst air quality in the country, second only to California. In this study, researchers seek to understand how chemical processes, and the interplay of human, marine and other natural elements combine to alter the composition and mix of pollutants in our air.

As interesting as the measurements will be for the team of scientists, Mak says they have far broader interests in the work, in addition to the academic enterprise. Even before they begin flying the aircraft — scheduled for Summer 2022 — the team will reach out to local officials, residents and politicians. They are eager, they say, to work with the community because they want their measurements to result in action that will lead to improvements in regional air quality.

“We want to apply our observations and analyses to improve current environment conditions,” Mak said. “I think the political awareness in both New York State and NYC gives us an advantage because leaders at state and local levels have been very much interested in air quality and reducing greenhouse gas emissions.”

In a partnership with Stony Brook’s Alda Center for Communicating Science, the team of researchers will participate in science communication training programs that will help them build trust among members of the community, including politicians and policymakers, and invite them to engage with the science and the research. They will bring high school students into the work through SBU’s School of Atmospheric and Marine Science’s summer Collegiate Science and Technology Entry Program, designed to bring minority students from high-needs districts to Stony Brook to explore science. They will host at least one open house, to invite community members to explore the plane and learn about aerial pollution monitoring projects.

“Across the world, we see significant impacts on public health because of air pollution — increased rates of asthma, heart and lung diseases, cancers and stroke,” said Laura Lindenfeld, Dean of the School of Journalism, Executive Director of the Alda Center, and Vice Provost for Academic Strategy and Planning. “Engaging people from all backgrounds in science can help our society make good policies and informed decisions in general. Inviting them to explore this project, and others like it, is critical to inspiring action to adapt and combat climate change.”

While the plane is in the air, researchers will use dozens of specialized instruments — including some that have rarely been used before — to take as many measurements of the different compounds and air conditions as possible. With all the data, they should be able to determine patterns and expand their understanding of how chemicals interact with the different environments and weather conditions to create different types of compounds, including smog and other particulate matter, ozone, and harmful volatile organic compounds, which are all components of photochemical smog.

“We’re trying to make as many relevant measurements as we can so we can apply them to different situations of weather and season,” said Mak. “At the end of the day, we will be able to understand the evolution of these compounds and develop predictive models. So if the question, for example, is how much photochemical smog can be traced back to what trees emit, we should be able to answer that question. If we can answer those questions, that helps us understand how air quality and atmospheric chemical processes can be impacted by what we do, by human activities.”