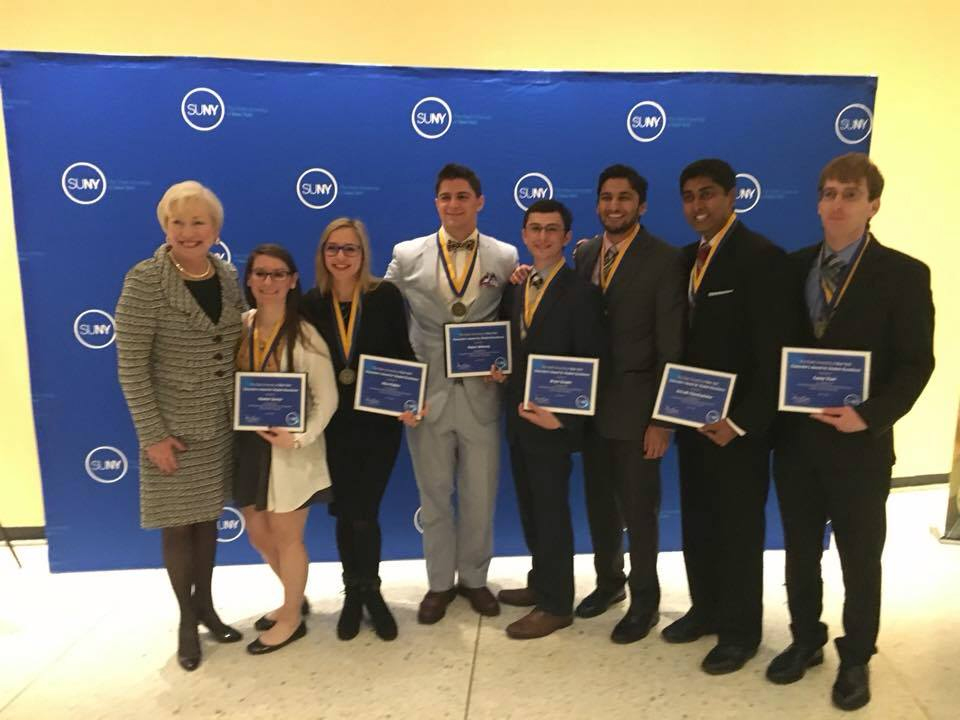 “This award is our way of saying ‘thank you’ to stand-out SUNY students whose achievements reflect their own impressive hard work as well as the support of their families and friends, and SUNY’s world-class faculty and staff,” said Chancellor Zimpher. “The students we honor with this year’s award have excelled academically, become role models on campus, and established themselves as leaders in the community. Congratulations to the Stony Brook University students being recognized today.”

NASA Astronaut Scott Kelly joined Chancellor Zimpher in recognizing student achievement with a video message highlighting the ways in which his time at SUNY Maritime College prepared him for the challenges he faced during his year in space as well as a successful 29-year career in government.

The Chancellor’s Award for Student Excellence was created in 1997 to recognize students who have best demonstrated, and have been recognized for, the integration of academic excellence with accomplishments in the areas of leadership, athletics, community service, creative and performing arts, campus involvement, or career achievement.

Anirudh Chandrashekar, from Westbury, NY, is a biomedical engineering major in SBU’s Scholar for Medicine program. He is doing research at Stony Brook Medicine’s Vascular Research Lab, working on a pilot clinical study to further understand deep vein thrombosis and other vascular diseases. Anirudh is a student ambassador for the Dean of Students Office, a peer mentor for the College of Engineering and Applied Sciences, and a member of the President’s Council of Student Advisors.

Meaghan Coyne, from Floral Park, NY, has thrived at Stony Brook, both in and out of the classroom, from science to music to athletics. She was awarded the Student Life Award for Recreational Leadership, completed a research internship at the New York Blood Center, and is conducting an IRB-approved study in the Stony Brook Emergency Room.

Maryam Ige, from Saint Albans, NY, attended secondary school in Nigeria prior to starting college at Stony Brook. Her experiences in Nigeria made her realize the importance of giving back to the community and have played an instrumental role in her decision to pursue medicine as a career. Maryam is president of the Pre-Medical Society at Stony Brook, a club dedicated to providing academic support and uniting pre-med students through community service.

Ashwin Kelkar, from Syosset, NY, became interested in research while in high school, when he studied inflammation under the direction of Dr. Kevin Tracey of the Feinstein Institute. He continued doing research at Stony Brook as an undergraduate, working under the guidance of Dr. Yusuf Hannun on the study of molecular pathways that can lead to cancer. In addition to research, Ashwin enjoys playing piano, swimming, reading and watching films.

Robert Maloney, from Rocky Point, NY, is a recipient of Undergraduate Recognition Awards for Outstanding Achievement in Leadership and in Community Service, was on the USA Rugby National Collegiate Academic Honor Roll and is a mathematics instructor and tutor for the Educational Opportunity Program and Biology-Mathematics Learning Center.

Japbani Nanda, from East Meadow, NY, aspires to become a physician who understands the patient and makes a difference in the world through her medical practice and writing. She is an Honors College Peer Mentor (Big Sibling) and student ambassador; member (singer) and secretary of YUVA, a South Asian a cappella group; and a recipient of the Outstanding Academic Achievement Award.

Alisa Rybkin, from Staten Island, NY, is a pre-medical student who values the importance of a well-rounded, interdisciplinary undergraduate experience. Through involvement in research, teaching and service, and with a strong passion for writing and dance, she displays a robust range of personal interests. Alisa published a research paper based on her work at Memorial Sloan Kettering Cancer Center and gave a research talk at Rogosin Institute of Weill Cornell Medical College.

Heather Savino, from West Babylon, NY, is in the School of Social Welfare and plans to obtain a master’s degree in social work with a concentration in public policy and social action, a law degree, and to run for elected office. Her goal is to make policies that create a more inclusive and affirming United States for all identities. Heather was part of the team that hosted National StandUp against Bullying Day and worked to make Stony Brook University this year’s Northeast LGBT Conference host.

Ruchi Shah, from Ronkonkoma, NY, is a founding member of SBU Camp Kesem, a student ambassador, a board member of the Hindu Student Council, and homecoming queen. She is the CEO of her own company, conducts cancer research, and was a science writer for the National Institutes of Health. Ruchi will attend SBU School of Medicine and is pursuing a career as a physician and medical correspondent.

Bryan Szeglin, from Blue Point, NY, has spent significant time conducting research at Memorial Sloan Kettering Cancer Center, focused on improving our understanding of cancer. He has also been committed to promoting literacy and education in underprivileged schools through the Scholars Book Drive. Bryan’s artistic pursuits in graphic design and music also flourish at Stony Brook; he is a newsletter editor and marching band clarinetist.