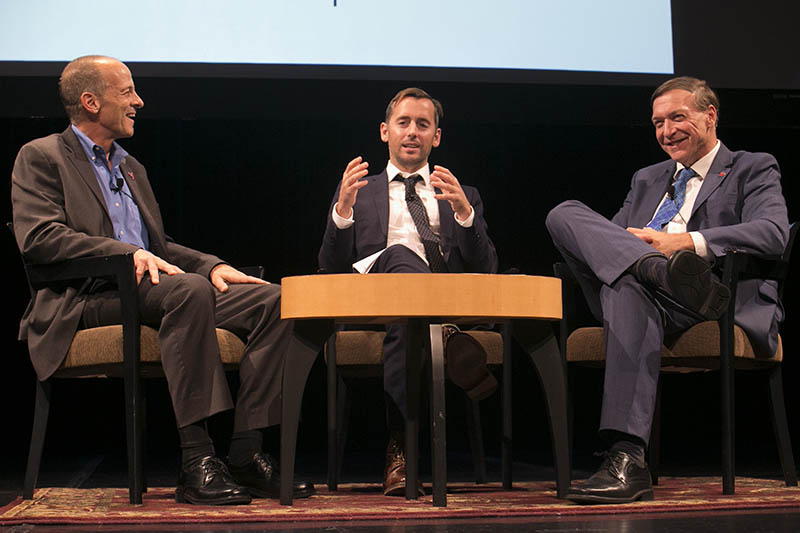 The challenges are formidable and the predictions bold — envisioning an end to extreme poverty, inequality and climate change by 2030.

Highlighting these ambitious goals, Timothy Bouley, MD, launched the Global Health Institute’s Precision Planetary Health Lecture Series October 26 at the Charles B. Wang Center Theatre. Bouley is a global health and environmental specialist who is at the forefront of the World Bank’s efforts to integrate health and environmental considerations into its investments.

President Stanley also reiterated Stony Brook’s commitment to generating the knowledge, with its interdisciplinary approach to research, to achieving these goals.

Professor Wright said that for the past 30 years Centre ValBio has focused on helping indigenous people and the international community to understand the value of conservation on Madagascar. She added that the population has swelled from 9 million people in 1984 to 23 million people today, putting it at risk for water-borne infectious diseases due to contamination.

She said that the island — the fourth largest in the world — is one of the richest places on earth in terms of biodiversity, and yet one of the poorest in terms of human conditions. “I am so pleased to welcome Peter Small and the Global Health Institute to combat some of these problems,” she said.

Small introduced Bouley as someone “who, because he took risks is a global leader, but more than that he is a practitioner.”

Bouley said that the World Bank’s overall mission is to help alleviate poverty by providing low-interest loans to developing countries, adding that Madagascar is in line for a $100 million multiphase project to improve nutrition.

Pinpointing geographic hotspots where the impact on human and environmental health is the greatest, such as central Africa, is a critical tool used by the World Bank. Identifying where climate change will pose the most health risks from cyclones and floods, which populations are most vulnerable, and understanding the health structures in place will aid the process.

Bouley said that understanding how the environment and health intersect — in various occurrences such as fires and floods that drive flea-bearing rats from fields and forests to human populations centers, resulting in the transmission of infectious diseases — will aid efforts to mitigate public health concerns.

Asked by President Stanley if he was optimistic about achieving these goals, Bouley said, “Although we have profound challenges such as ocean acidification and atmospheric CO2 warming, people are coming of age and asking, ‘What can I do to address this? Everyone needs to be asking this question.”