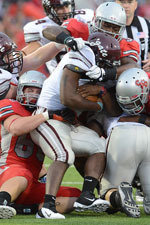 Senior Miguel Maysonet rushed for a career-high 198 yards as the Stony Brook football team topped Colgate, 32-31, before a standing-room only record Homecoming crowd of 10,278 at Kenneth P. LaValle Stadium on Saturday, September 22.

Junior Marcus Coker led the Seawolves with two touchdowns. Senior Cedrick Moore made nine tackles, including a game-saving tackle on Jordan McCord after he gained 33 yards, giving Colgate a first down on the Stony Brook 12 early in the fourth quarter. The Raiders settled for a field goal for their only points of the quarter.

“Tonight’s atmosphere was a special one,” said Head Coach Chick Priore. “When you have fans that are in the seats during warm-ups, generally, it’s going to be a great crowd.”

Stony Brook travels to face Army (0-3) on September 29 for the final non-conference game of the regular season. Next week’s game will be the Seawolves’ fifth contest against a Football Bowl Subdivision school.